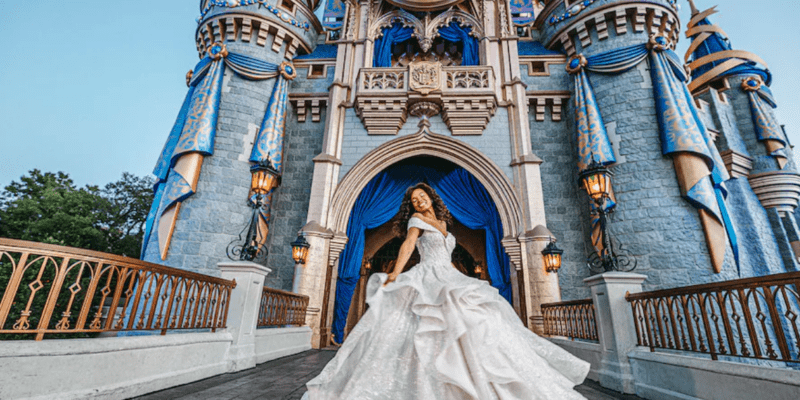 Disney Weddings and Disney Parks has just revealed an all-new wedding dress line inspired by the Disney Princesses, and let’s just say they are absolutely magical!

The new line of Disney Princess wedding dresses were unveiled this morning in a fashion show, brought to you directly from Walt Disney World Resort!

In honor of the new 2022 collection of Disney’s Fairy Tale Weddings gowns, and in honor of the 50th Anniversary of Walt Disney World, Disney Parks hosted a magical fashion show, where they showed some of the brand-new wedding gowns.

But that’s not all because Disney created a one-of-a-kind wedding dress, which brings “all the wonder, sparkle, and glamor of the 50th Anniversary celebration” together.

It’s a special time at Walt Disney World Resort, and to commemorate The World’s Most Magical Celebration, a one-of-a-kind wedding dress was designed. Encompassing all the wonder, sparkle and glamour of the 50th Anniversary celebration, this stunning gown closes the show in a way only Disney can – taking on the EARidescence from the Beacons of Magic, it’s something you can only see to believe.

You can see this one-of-a-kind dress in the image below.

If you want to see the entire line of the 2022 Disney’s Fairy Tale Weddings collection, watch the fashion show in the video clip below:

What do you think of the new 2022 collection of Disney’s Fairy Tale Weddings gowns? Let us know which one your favorite is in the comments below.