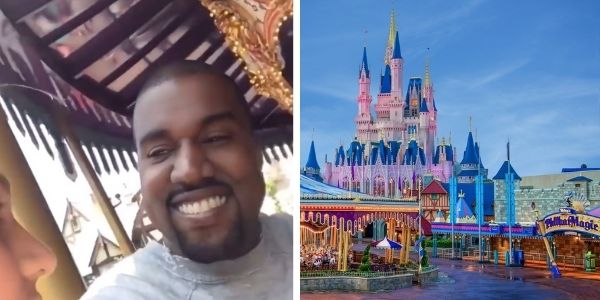 As we have covered so many times here at Inside the Magic, celebrities love to spend time at the Disney Parks just as much as we do.

Whether it’s Marvel’s Chris Evans (Captain America) celebrating Thanksgiving at the Magic Kingdom or Kylie Jenner shutting down “it’s a small world,” celebrities can’t get enough of the thrilling and immersive fun that can be found at all of the Disney Parks. While it’s fun to keep up with all the hot gossip around the latest Hollywood star showing up at Disney, it’s also fun to take a look back at some of the more memorable encounters Guests have had with celebrities in the past.

Speaking of the Kardashians and those associated with the family, one of the most viral celebrity sightings from the last decade is a video in which a fan meets the one and only, Kanye West while he was vacationing in Disney World. In the video, the fan and Kanye both are riding the Prince Charming Regal Carrousel in the Fantasyland section of Magic Kingdom.

In the video above, the young fan approaches Kanye and asks him how he wrote his infamous song, “I Love Kanye,” a track from his 2016 album entitled “The Life of Pablo.” Kanye answers the question in the most Kanye West way possible by simply saying, “I just wrote about what I love.” The video became instantly viral and has been a huge meme in the Kanye West community ever since, most notably for featuring him smiling, a rare occurrence for the rapper, designer, self-proclaimed god, etc.

Along with Kanye West, Kourtney Kardashian, Khloe Kardashian, and Kim Kardashian West (whose relationship with Pete Davidson has shaken the entire country) the entire Kardashian family are all big fans of Disneyland, having celebrated many of their kids’ birthdays there in the past with all sorts of special Guests and big-name celebrities.

Climb aboard one of 90 wood-carved ornate horses—or one intricately carved chariot—at this classic attraction inspired by Disney’s Cinderella. Bedecked in golden helmets, decorative shields and flowing flower garlands and feathers, each beautiful horse is unique.

Prince Charming Regal Carrousel was built in 1917 by the Philadelphia Toboggan Co. The attraction began life as the Liberty Carrousel at Belle Isle Park in Detroit, Michigan. It’s been delighting Guests at Walt Disney World Resort since 1971

What do you think of this funny interaction with Kanye West? Have you ever spotted a celebrity at Disney World? What was your experience like?