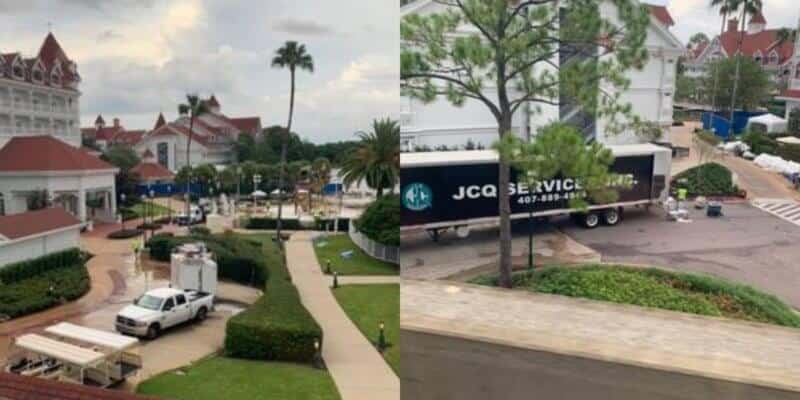 With the NBA Playoffs having only 4 teams left in the series, the Walt Disney World ‘bubble’ is beginning to pop. Amid the beginning of the pandemic, we saw a halt in all professional sports, the NBA league being one of them.

In an attempt to continue it’s season, the NBA looked for a home where the basketball season could safely continue — Which ended up being at Walt Disney World Resort. @ScottGustin has now confirmed the barricades at Disney’s Grand Floridian are down and ITM was there to confirm it.

Crews at the Grand Floridian are taking down the blue NBA wall today. The resort fully opens to guests on Monday. https://t.co/FPRVBfkdCK

Disney World has the ESPN Wide World of Sports Complex which was the perfect venue to house the 2020 NBA season. The Walt Disney World resort is around the size of San Fransisco, and was also the perfect bubble system as the area could act as a controlled environment to players. The 22 basketball teams would be confined to 3 Disney resorts:

All three resorts being luxury level when it comes to Disney’s standards, it didn’t hurt to be an NBA player this season.

What did this mean for Disney Resort Guests?

Well when Disney opened back up, the NBA bubble ended up affecting many vacations. With some resorts like the Yacht Club staying fully closed to the Grand Floridian being blocked off to protect the NBA players privacy, there were definitely barriers.

Now with the NBA playoffs coming to a close, the 4 teams are now being housed in the Grand Destino Towers. This means the Grand Floridian was finally able to take down it’s barricades.

We wrote about a permit Disney’s Grand Floridian filed earlier this week for general construction, this is likely due to the fact that the barricades have now come down. Disney Guests are now able to freely walk around the resort, and considering it is the companies Flagship Resort, it is nice to have the Grand Floridian feeling even a little bit more normal.

But it is also pretty cool to know that the Thunder, 76ers, Rockets, Pacers, Mavericks, Nets, Grizzlies, and Orlando Magic were housed here. For those of you following the series, the 4 NBA teams left in the Disney bubble are:

Overall, Disney has been able to provide a clean and safe environment for the NBA players to play in without being exposed to the pandemic while on the opposite end, the NBA has provided Disney with a very important revenue boost as they took over the three hotels and the sporting complex on property.

Are you happy to have the Grand Floridian come back to normal? Let us know!