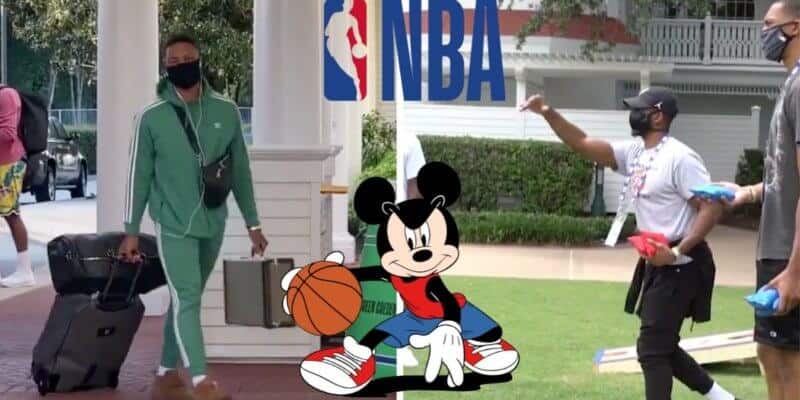 The NBA will officially resume the 2019-2020 NBA season at Walt Disney World Resort in Orlando, FL. It will resume in July with team practices and games being played at ESPN Wide World of Sports Complex in the Arena, HP Field House and Visa Athletic Center.

The NBA players have already begun moving into Orlando and onto Walt Disney World property, even though the NBA season won’t officially resume until July 30. The players will be staying at the Gran Destino Tower at Disney’s Coronado Springs, Disney’s Grand Floridian Resort & Spa, and Disney’s Yacht Club.

While the NBA players move into Walt Disney World property, it has been confirmed that these players (representing 22 NBA teams) and NBA staff will not be allowed to leave the bubble. Walt Disney World Resort Cast Members will be cleaning the Disney Resort hotel rooms, preparing meals for them, as well as providing other services for them while they remain inside the NBA bubble.

And now, thanks to the NBA and SportsCenter, we can now get an inside look at what exactly the NBA bubble looks like. At the beginning of the video that NBA recently released, you will see the construction that was done on the courts for the NBA players so they can practice prior to the NBA season officially resuming.

Related: Disney Workers, NBA Players May Be At Risk for Infection

NBA Players Practice on the Court

You will also see some of the NBA players practicing for the regular season as they shoot hoops, warm up, play one on one, and even get some fun in by throwing trick shots. As you can see in the screenshot below, if the players aren’t physically practicing, they are wearing their face coverings to be as safe as possible.

Related: Some NBA Players Are Disney Superfans Like Us

Activities Within the Bubble

While the players aren’t on the court practicing for the upcoming 2020 season, they are letting loose and having a bit of fun as they play corn hole, table tennis, pool, and other fun activities with one another. The players also have a gym within the NBA bubble so that they can stay in shape prior to the resumption of the basketball season.

You can watch the full video in the tweet below.

A closer look at everything inside the NBA bubble ?

Does the NBA bubble look like what you imagined it would? Let us know in the comments below.