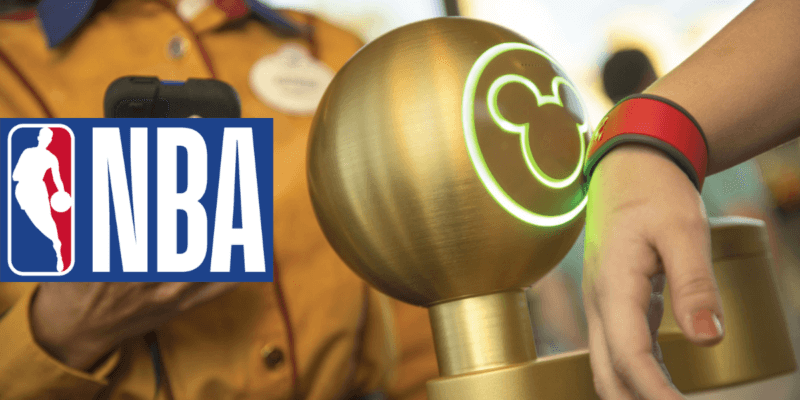 As the NBA gets set to move operations to their “Bubble” at the Walt Disney World Resort, they issued a 113-page health and safety manual for players to follow. One of the most notable details includes the mandatory use of MagicBands which will be used not just for hotel room keys, but also for security and health screening.

According to The Athletic:

All NBA personnel at the Disney World campus will be required to wear a MagicBand at all times, other than during workouts, The Athletic has learned. A Disney MagicBand will provide access control functions as a hotel room key, for security checkpoints and to check-in for coronavirus testing and other medical screening.

The NBA is working to utilize an access control software that would allow people to scan their MagicBand at a checkpoint, and allow the person to proceed if the MagicBand shows green color. However, if the band displays a different color, additional medical attention will be required.

MagicBands have become a Walt Disney World staple since they were introduced in 2013. Starting out as a semi-fashionable and instantly collectible accessory, Disney has expanded the MagicBand’s capability to be completely connected to your My Disney Experience account.

Before the global pandemic forced Disney World to close, Guests could not only use it to scan their tickets, but they could also use it as a hotel room key, a payment system, upload Disney PhotoPass pictures to their Disney accounts, and so much more. Now, it appears that they can also be utilized to track the health status of would-be Guests.

It is easy to see how this feature could help expedite the screening process for Guests staying on property and are looking to go to multiple theme parks and hotels. If they do not pass the initial health screenings, their Disney account is flagged and their MagicBand will prove it. However, there is no comment from Disney at this point, leaving this final note to be strictly speculation.

This news does come shortly after Disney World announced it would discontinue its tradition of providing complimentary MagicBands to Disney Resort Hotel Guests.

What do you think about the NBA using MagicBands to track health screenings? Do you think this could be applied to Park Guests? Let us know in the comments!