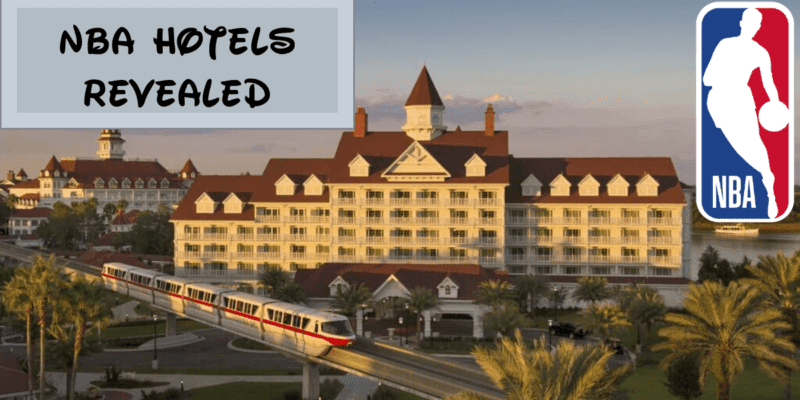 As the time draws nearer for the NBA to finish its 2019-20 season at the Walt Disney World Resort, more news is coming to light regarding the details of the players’ stay on-property.

Where will the NBA players be housed?

The 22 NBA teams playing at Disney World will reportedly be housed in three different resort hotels.

According to NBA insider Shams Charania, the teams will be staying at the Gran Destino Tower at Disney’s Coronado Springs Resort, the Grand Floridian Resort and Spa, and Disney’s Yacht Club Resort.

The teams will reportedly be split up as such:

Insider Keith Smith illuminated further explaining that the Gran Destino Tower is going to be the “Main” hotel with Coronado Springs’ convention center posing as one of the main hubs. Smith reports that availability at both the Grand Floridian and Yacht Club resorts are not guaranteed if any of the teams staying there make it to the playoffs.

Per Walt Disney World Sources: If a team staying at Grand Floridian or Yacht Club stays in the playoffs longer than expected, they may be asked to move. "We'll cross that bridge when/if we come to it." Part of Disney's play is to get rooms back into inventory for paying guests.

According to Shams Charania’s article in The Athletic,

It appears that the players will have the opportunity to make room for their family members.

The Athletic reports the following:

Outside entertainment also might be a possibility for NBA players and their families as well as access to Disney movies not yet made public.

Per Walt Disney World Sources: Disney will make movies available for players and their families (once they join). This is likely to include movies that have not been released to the general public, including Marvel's Black Widow.

What is “the NBA Campus”?

The NBA Campus will reportedly include the three hotels housing the players and staff, the Wide World of Sports complex, and separate practice courts. It will also include other auxiliary sites established like one of the golf courses or a medical facility.

As far as courts go, Smith explains the setup will reportedly be as follows:

Per Walt Disney World Sources: Any mixing/mingling of NBA teams within each resort or across resorts will be at the discretion of the NBA. Disney will not enforce that.

The campus bubble does not include any theme parks at this time. However, time in the theme parks might be a possibility.

According to Smith’s sources, “There is a potential that special access to the theme parks and attractions could be arranged, but will be at the sole discretion of the NBA. It’s likely to happen after families arrive and will be held after hours, following day guests departures.”

Per Walt Disney World Sources: There is a potential that special access to the theme parks and attractions could be arrange, but will be at the sole discretion of the NBA. It's likely to happen after families arrive and will be held after hours, following day guests departures.

Related: No, NBA Players Will Most Likely NOT Have Free Reign Across Disney World

The NBA players are reportedly expected to arrive at Disney World starting July 7 and the season is expected to conclude by October 13, but it is unclear when and for how long the players and their guests may occupy those rooms in those three Walt Disney World Resort Hotels.

What do you think about the NBA coming to Disney World? Let us know in the comments!