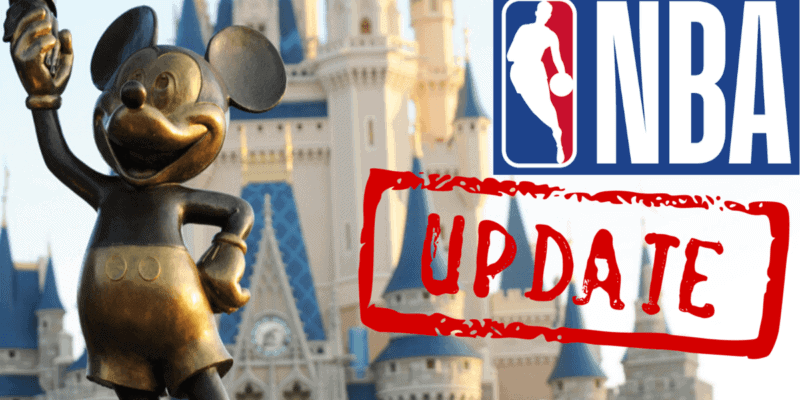 The National Basketball League is going to Disney World! 22 of its professional basketball teams will converge on the ESPN Wide World of Sports Complex, with games beginning July 31 and ending by October 12.

This special event has raised concern over would-be Disney World Guests regarding how the NBA would affect their Disney World Vacation. But Inside the Magic can say we have learned a little more about what to expect. Primarily, the players will be required to stay “on campus” for the duration of the season.

The news comes from NBA insider Shams Charania who tweeted:

NBPA leadership stressed to players that it is mandatory to stay on the Disney World campus in Orlando during play. There won’t be tracking devices on players. But goal is to keep everyone in safe environment.

Sources: NBPA leadership stressed to players that it is mandatory to stay on the Disney World campus in Orlando during play. There won't be tracking devices on players. But goal is to keep everyone in safe environment.

When Inside the Magic shared the news that the NBA was officially coming to Disney World, comments from our readers shared concern about the pro league’s players, coaches, and executives being able to “cut the line” essentially and have special access to Disney parks and Disney Dining. Apparently, that will not be the case.

Now, it is Disney World. It makes sense for park visits to be scheduled, but beyond that, they will be required to stay on campus. Even if the excuse is only for the health and safety for all of the players and personnel involved.

“Disney World Campus” could be interpreted a few ways, though. It could be referring to Sports Complex where they will play, the resort hotel they choose to stay at, or it could mean Walt Disney World property in general. If the latest case is true, then Guests just might see the NBA personnel having more freedom around the parks.

While Disney has not yet shared publicly where the NBA will stay, Scott Gustin reported on Twitter that according to ESPN and their sources, “NBA teams will be contained to three specific hotels within the Disney complex.”

NEW: According to ESPN, “NBA teams will be contained to three specific hotels within the Disney complex.” Players will be tested for COVID-19 every night. pic.twitter.com/cRoIuVswyA

The continuation of the NBA 2019-20 season continues to be a developing story, and Inside the Magic will continue to update its readers on new information as it comes to light.

Do you think Disney will give the NBA free reign and first access to Parks and dining options? Why or why not? Let us know in the comments!

Comments Off on No, NBA Players Will Most Likely NOT Have Free Reign Across Disney World