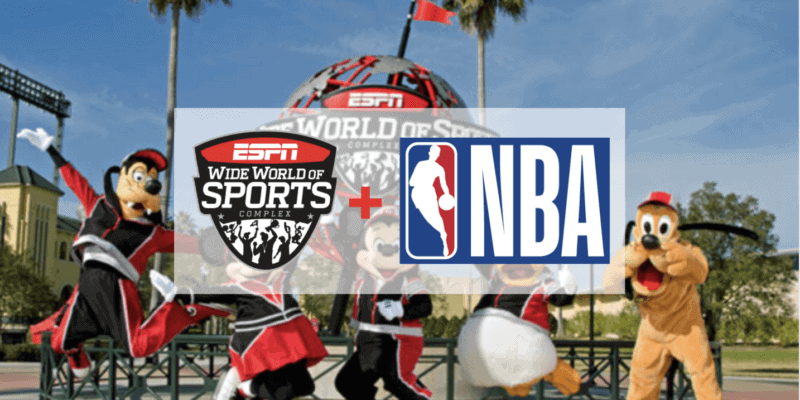 *UPDATE: This article has been updated to reflect the latest information from the National Basketball Association and the Walt Disney Company

Last month, we reported that the National Basketball Association, which suspended its season until further notice on March 11, was considering restarting the season at Walt Disney World Resort’s Wide World of Sports Complex.

Now, the NBA has confirmed that they are, in fact, looking at Disney World as a potential single-site venue for the league’s 30 professional basketball teams to continue the 2020 NBA season. They have a late July target date.

The Portland Trailblazers were among the first of the NBA’s teams to take to social media to share that the 2020 NBA season will officially resume at Walt Disney World Resort in July.

NBA spokesman, Chief Communications Officer Mike Bass, said in a press release today, “The NBA, in conjunction with the National Basketball Players Association, is engaged in exploratory conversations with The Walt Disney Company about restarting the 2019-20 NBA season in late July at Disney’s ESPN Wide World of Sports Complex in Florida as a single site for an NBA campus for games, practices and housing.”

Bass continued, “Our priority continues to be the health and safety of all involved, and we are working with public health experts and government officials on a comprehensive set of guidelines to ensure that appropriate medial protocols and protections are in place.”

The Walt Disney Company is the majority owner of ESPN. The Wide World of Sports Complex at Disney World has played host to numerous professional sporting events, including the NFL Pro Bowl and MLB Spring Training for the Atlanta Braves.

The Disney sports campus is large enough to allow for any necessary social distancing measures and other safety regulations the NBA might put in-place. Wide World of Sports measures about 40 square miles and is home to almost 24,000 Disney-owned and operated hotel rooms.

Orlando mayor Buddy Dyer told local radio station 96.9, “I didn’t envision it going exactly this way as far as enhancing our reputation as the [No. 1] sports destination in the country, but we would certainly be excited about hosting both the NBA and/or MLS for their seasons or partial seasons.”

Do you think the NBA season should restart at Disney World? Tell us your thoughts on the possibility of professional basketball resuming in the comments!