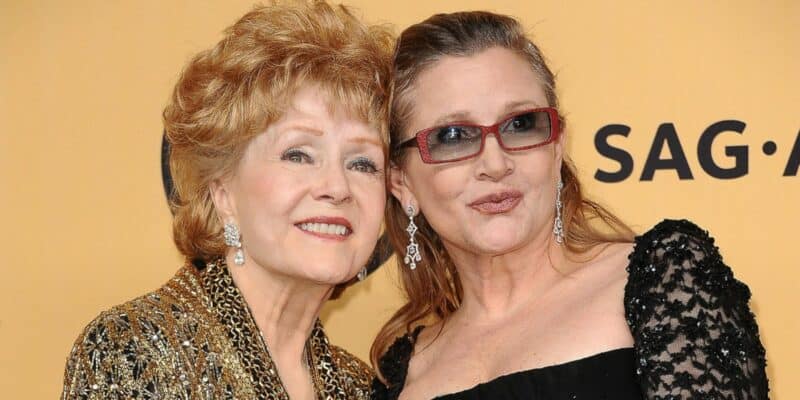 The daughter of Hollywood royalty — Carrie’s mother was silver screen icon Debbie Reynolds, and her father was the equally famous singer Eddie Fisher, who notoriously left Reynolds for Elizabeth Taylor — the late actress was cast in George Lucas’s Star Wars: Episode IV – A New Hope (1977) when she was just 19 years old.

Fisher went on to become a cinematic legend as Princess Leia Organa, later Princess General Leia Organa Solo, in six of the nine Skywalker Saga films, encompassing the original trilogy and the sequel trilogy — the aforementioned A New Hope, Episode V – The Empire Strikes Back (1980) , Episode VI – Return of the Jedi (1983), Episode VII – The Force Awakens (2015), Episode VIII – The Last Jedi (2017), and Episode IX – The Rise of Skywalker (2019).

Archive footage was used in The Rise of Skywalker, which wasn’t filmed until after the star’s death.

Fisher is synonymous with costars Mark Hamill (Jedi Knight Luke Skywalker) and Harrison Ford (Han Solo), who have both spoken out about how much they miss her humor and unmatched candor in the years following her untimely passing.

Long before Fisher was Princess Leia, though, she grew up on the Upper East Side of Manhattan in a home with her mother. Reynolds’s former residence is now on the market for a cool $11.5 million — and it has every bell and whistle you could possible want in a house.

The formal living room in the residence, which was built in 1910, still features many original details, including crown molding and a stunning fireplace.

Many aspects of the historic Upper East Side home have been updated, including the chef’s kitchen which now features modern finishes and a dining nook.

Reynolds and Fisher’s former home also features a stunning staircase — we can almost imagine little Carrie trying to slide down the bannister!

The house also has several additional living areas, including this rec room that leads to an outdoor patio — a true luxury in Manhattan!

The master bathroom in the house where Reynolds raised her daughter has been redone in calming neutral tones to provide the homeowner with an escape from the hustle and bustle of city life.

More historic details can be found in the entryway, which features stunning marble floors.

One of the home’s four bathrooms offers tons of natural light thanks to a skylight above the combination bathtub/shower.

The master bathroom, meanwhile, has been decorated in the same neutral tones as the master bedroom. It’s highlight? Two showers!

The home also has a lovely library/study area for relaxing after a long day.

Another of the home’s five bedrooms has an exposed brick wall — and has clearly been occupied by a young Philadelphia Eagles fan recently.

And, last but not least, the New York City home has a secret wine cellar that can hold up to 800 bottles!

The official Compass listing for the property at 154 East 74th Street in Manhattan features the following neighborhood guide:

An upscale neighborhood with affluent roots. Although the Upper East Side is best known for upscale real-estate, well-known prep schools and designer boutiques, affordable apartments and relaxed living are easy to find in this quiet and bright neighborhood.