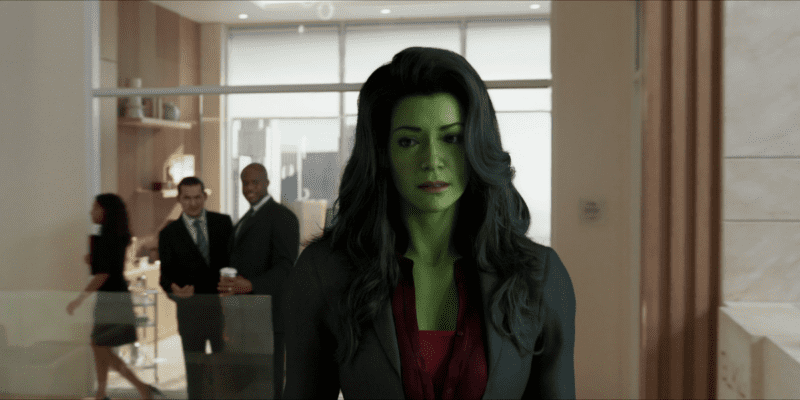 She-Hulk: Attorney at Law is just around the corner from appearing on Disney+ in August, but a new trailer revealed a massive character origins change for Jennifer Walters (Tatiana Maslany).

She-Hulk is one of the most beloved Marvel characters that not every fan knows about. Still, virtually every Marvel fan understands how the New York attorney Jennifer Walters becomes the green monster.

In Marvel Comics, Jennifer Walters is shot by a mobster and significantly injured. Walter’s blood mutates with the gamma-radiated blood of her cousin Bruce Banner, causing her to become She-Hulk.

Now, for the upcoming She-Hulk streaming series, Marvel Studios has changed the backstory of how Walters came about her extraordinary powers:

She-Hulk’s origin will be different from the comics.

It looks like Jennifer & Bruce get in a car accident & she’s exposed to his blood & that’s what turns her into She-Hulk.

She-Hulk’s origin will be different from the comics.

It looks like Jennifer & Bruce get in a car accident & she’s exposed to his blood & that’s what turns her into She-Hulk. pic.twitter.com/UMUXFzJYsf

“Jennifer Walters is an attorney who has accidentally taken in the Hulk’s blood.“

Well, there you have it. As it happens in the Marvel comics, Jennifer Walters no longer has the blood of Bruce Banner/Hulk infused into her bloodstream over a life-saving medical operation.

THIS IS ACTUALLY SO EXCITING! A SHE-HULK FEATURETTE!!!

THIS IS ACTUALLY SO EXCITING! A SHE-HULK FEATURETTE!!! pic.twitter.com/KrYVRtn3PG

In a turn of events, a freak car accident will be why She-Hulk becomes She-Hulk.

With Charlie Cox returning as Daredevil for the upcoming streaming series, it’s clear that Kevin Feige has more planned than what initially meets the eye.

With these new powers’ changes, the future of She-Hulk remains entirely unclear.

Tatiana Maslany stars as Jennifer Walters / She-Hulk, alongside Jameela Jamil, Josh Segarra, Ginger Gonzaga, Jon Bass, Renée Elise Goldsberry, Tim Roth, Mark Ruffalo, and Benedict Wong. She-Hulk was announced in August 2019, with Gao hired in November. Coiro joined to direct multiple episodes in September 2020, and Maslany was cast. By December, Roth and Ruffalo had joined the cast and Anu Valia was also set to direct. Filming began in mid-April 2021 in Los Angeles and Atlanta, Georgia, and lasted until mid-August. The subtitle for the series was added by May 2022.

She-Hulk: Attorney at Law premies on Disney+ on August 17!

Do you think that Marvel should have changed She-Hulk’s origins? Comment below!