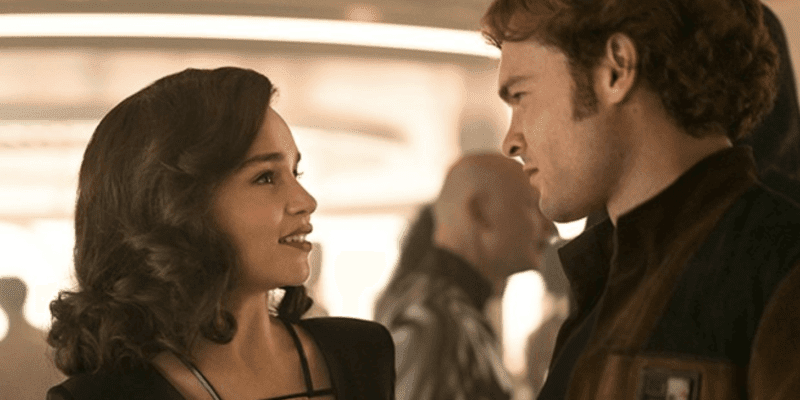 Despite being the worst Star Wars at the box office, Alden Ehrenreich’s Solo: A Star Wars Story (2018) has started to be more appreciated by fans. Some have even asked Lucasfilm to make a sequel, but that won’t happen for a long time after Kathleen Kennedy confirmed that they thought Solo was a “mistake” and don’t plan to make more movies about Han at an early age due to recasting Harrison Ford.

While fans may be disappointed with Solo not getting a sequel, this doesn’t have to stop a fan-favorite character from returning to live-action. With Star Wars bringing Emilia Clarke’s Qi’Ra into the War of the Bounty Hunters and Crimson Reign crossover series, it seems that Star Wars has a lot of plans for Qi’Ra’s character.

Jon Kasdan felt that Star Wars could easily bring the character back into live-action and even talked this over with Jon Favreau, the creator, and writer for The Mandalorian:

“I think someday we’re gonna see what happened, and how Qi’ra advanced through the world and through the crime syndicates. I’ve talked to Jon Favreau about it; he’s a big fan of that movie and some of the stuff we built out. I always say, “Well, you’re the guy to figure it out.” I always look to him to keep the story alive and keep it going. Star Wars is going in so many fun directions. Specifically, I saw that trailer for Andor today and I thought, ‘Enfys Nest is gonna show up somewhere in that show.’ I’m hopeful that a lot of those people continue on the journeys they were on.”

It’s very possible for Enfys Nest to show up in Andor, but it’s interesting how Kasdan believes Favreau is the man to “figure it out” for how Qi’Ra will return. The Book of Boba Fett did bring the Pyke Syndicate into live-action which allowed fans to see more of the crime syndicates. With Qi’Ra being in control of the Crimson Dawn syndicate, it’s possible that Star Wars will wait to show more of the syndicate in the comics after Star Wars: Episode IV — Return of the Jedi (1983) and wait for a live-action series to explore what happens to the syndicate.

Or Qi’Ra could appear as a survivor trying to recreate the syndicate, but Star Wars hasn’t explained what happens to the Crimson Dawn just yet, but their main goal in the comics right now is to kill the Emperor so it will be interesting to see how things end since Crimson Dawn won’t end up killing Palpatine.

Do you think Emilia Clarke will return to Star Wars soon? Let us know what you think!