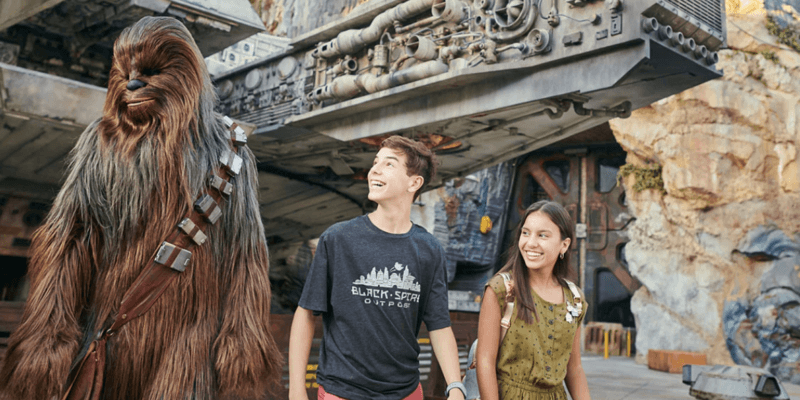 When The Walt Disney Company purchased Lucasfilm, Ltd. from George Lucas in 2012, Star Wars fans didn’t know exactly what to expect. Their beloved franchise — which began in 1977 with the first original trilogy film, Star Wars: Episode IV – A New Hope (1977) — was in new hands for the first time in nearly 40 years.

What is Star Wars: Galaxy’s Edge?

The 14-acre Disney Parks expansion can be found at both Disney’s Hollywood Studios Park at Walt Disney World Resort in Orlando, Florida and Disneyland Park at Disneyland Resort in Anaheim, California.

When the two Star Wars lands opened — on May 31, 2019, at Disneyland and on August 29, 2019, at Disney World  — Star Wars fans could literally step into a galaxy far, far away for the very first time. The experience? Nothing short of incredible.

Although Batuu has yet to actually appear in a Star Wars movie or series, it is mentioned in Solo: A Star Wars Story (2018), when droid L3-37 told Lando Calrissian (Donald Glover) that without her help, he wouldn’t make it from “here [Vandor] to Black Spire”.

The land’s backstory, to be fair, is rich, detailed, and, frankly, amazing if you’re a proverbial “Star Wars person.” But, for those who don’t fall into this category, the lack of familiar characters beyond Chewbacca, Rey, and Kylo Ren isn’t necessarily appealing.

Where can fans meet Star Wars characters at Disney World?

Here, we dive into exactly how — and where — to meet Star Wars characters at Walt Disney World Resort.

The Star Wars Launch Bay is an attraction located in the Animation Courtyard at Disney’s Hollywood Studios theme park. Following its closure as a result of the COVID-19 pandemic, this Star Wars meet and greet area is officially open again  as of July 17, 2022.

In the reopening announcement, Disney noted:

A celebration of the legendary space saga, Star Wars Launch Bay is your place for a warm embrace with Chewbacca, a face-to-droid encounter with BB-8 or a run-in with Darth Vader himself for those brave enough.

The official description of the Launch Bay reads:

If you’ve ever asked yourself, “Can you meet characters at Star Wars: Galaxy’s Edge?,” the short answer is yes. As previously noted, Rey, Chewbacca, and Kylo Ren are all available to Guests at various times.

Visitors on Batuu may also run into First Order stormtroopers and Vi Moradi, Princess Leia’s spy who was created specifically as part of the Galaxy’s Edge backstory.

Fennec Shand and Boba Fett have debuted at Galaxy’s Edge at Disneyland Resort, but have not yet made their way to Walt Disney World Resort as of June 2022.

Rey is a roaming character and, as such, does not have a specific meet and greet time at Disney World currently. The planDisney panel did, however, give some insight as to where Guests might find the sometimes elusive Resistance fighter:

We look forward to welcoming you to Batuu. As you may know, Rey is one of our most valued Resistance fighters. As such, we often must protect her whereabouts so that First Order operatives do not locate her. Occasionally, she makes an appearance to relay vital information to other Resistance forces, to inspire us to continue the Cause.

On our last visit, we were fortunate to catch a glimpse of Rey on Batuu in Star Wars: Galaxy’s Edge. Our girls were in awe. As we scouted the area, we encountered several members of the Resistance and found ourselves confronted by members of the First Order as we waited to meet the Gatherers in Savi’s workshop. Later on during that same visit, silence ensued as stormtroopers entered Oga’s Cantina. I am proud to report that no one revealed the details of the secret Resistance base.

Kylo Ren, again, does not have a specific meet and greet time at Disney World. However, Guests can get up close to him when he exits his ship at various times of day. Per planDisney:

The show, Star Wars: A Galaxy Far, Far Away, is a live-action adventure packed with the greatest and most powerful Star Wars characters! Kylo Ren takes center stage, this is a must-see for the future Knights of Ren.

Kylo often takes part in searching for a Rebel Spy during Star Tours- The Adventures Continue! Kylo can also be found during Star Wars: Rise of the Resistance. These are two of my favorite rides, and any Ben Solo enthusiast would think the same!

Are there characters on the Star Wars: Galactic Starcruiser?

The Star Wars: Galactic Starcruiser hotel officially opened at Walt Disney World Resort in March 2022. It falls in the same place in the timeline as Star Wars: Galaxy’s Edge, so Guests can expect some overlap with the characters who appear onboard.

Rey, Chewbacca, and Kylo Ren are all a part of the Galactic Starcruiser story, for example. However, the first-of-its-kind Resort hotel — which makes Guests feel as though they are literally flying through the galaxy on a two-night adventure that goes “horribly, horribly wrong” — also has many other brand new Star Wars characters available.

Halcyon passengers are welcome to interact with all of these characters, both human and alien, as if they were actually passengers on a luxury starliner in the Star Wars universe.

Below, you can find a list of key characters who currently appear on Star Wars: Galactic Starcruiser voyages:

Who is your favorite Star Wars character at Disney World?