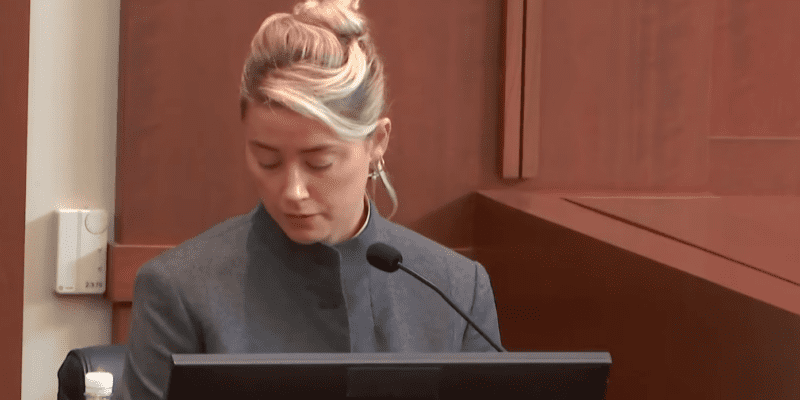 Amber Heard was caught in a lie regarding a concealer and color-correcting kit she claims she used hide and cover her bruises from her alleged physically abusive relationship with Mr. Depp.

Amber Heard‘s lawyer, Ben Rottenborn, presented his opening statements where he showed the jury a Milani Cosmetics‘ “All In One Correcting Kit” to the jury, and claimed Ms. Heard used the concealer and color correcting kit to hide and cover her bruises from her alleged physically abusive relationship with Mr. Depp.

Also more recently, TMZ obtained a photo of Amber Heard with a bloody lip, which she alleges was from a violent attack by her ex-husband, Johnny Depp. Heard’s attorneys tried to submit the photo into evidence, but there were two problems.

The first was the judge said the photo would have had to be submitted during the discovery phase. The second, the meta-data of this photo proves this photo was taken in 2012; however, Ms. Heard testified during the U.K. liable trial that the first incident of violence from Mr. Depp was 2013.

Ms. Heard is now testifying that she got her U.K. dates wrong and obtained a log showing appointments the Aquaman actress had with her therapist, which says she was talking about abuse in early 2012.

Now, Ms. Heard has been caught in another lie, this time while under oath.

In 2018, Ms. Heard appeared on a Dutch talk show called RTL Late Night where she said, “$7million in total was donated — I split it between the ACLU and the Children’s Hospital of Los Angeles. I wanted nothing,” in reference to her divorce settlement with Mr. Depp.

On the stand yesterday, Monday, May 16, during Heard’s cross-examination, Ms. Heard finally admitted to failing to pay her pledged $3.5million donation to the ACLU after she previously claimed to have made the donation.

Ms. Heard then proceeded to blame Mr. Depp for not being able to donate that money because he sued her.

However, the issue is Ms. Heard has previously claimed multiple times that she had donated the entire divorce settlement to charity — including while under oath in Depp’s 2020 libel case in the United Kingdom.

The Johnny Depp vs Amber Heard defamation trial resumed yesterday after taking a week-long break as the judge had a previous engagement to attend to.

Depp’s team will continue the cross examination with Ms. Heard on the stand in the Fairfax courtroom today.

Johnny Depp’s legal team will continue the cross examination with Ms. Heard on the stand in the Fairfax courtroom today, Tuesday, May 17.

Have you been following the Depp vs Heard trial? What do you think about the cross-examination? Let us know in the comments below.