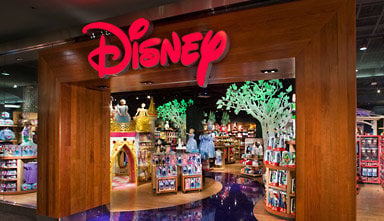 Beginning in 2021, The Walt Disney Company dramatically shifted its retail focus away from traditional mall stores and flagship locations — such as those in New York City’s Times Square and Paris’s Champs Elysses — to both the online space and shop-in-shops like those that exist at Target stores around the United States.

Before Disney’s March 3, 2021 confirmation that they would be “significantly reducing” the number of Disney Store locations, there were upwards of 300 Disney Stores. As of December 21, International Business Times reported that the amount of “retail stores that Disney is closing are estimated to leave the retailer with about two dozen locations.”

For Disney fans who don’t live near Walt Disney World Resort in Orlando, Florida, or Disneyland Resort in Anaheim, California, visiting their local Disney Store locations brought a dash of magic to everyday life. Fans have found themselves devastated by the hundreds of store closures, but now there is a glimmer of hope for those who reside in (or frequently visit) the Orlando area.

Related: The Orlando Airport Is Getting a Major Upgrade For Disney World Travelers

Progress is being made on the brand new, reimagined Disney retail outlet on Orlando’s International Drive (I-Drive).

In June 2021, Orlando Business Journal shared some details about the project:

…[Disney sought permission from Orange County] to build a gargantuan, ribbon-like art display at 8050 International Drive on the Hollywood Plaza garage, Orange County records show. The entertainment giant is partnering with Japan-based Mitsubishi to install and maintain the dynamic art…

The OBJ article also noted that a store would be part of the project. Now, Click Orlando reports:

“We took a lot of knowledge from setting up the 50th art installations in our parks and the Orlando International Airport and wanted to spread a little of that magic out into the world,” said Will Gay, design director with Disney’s Yellow Shoes Creative Group. “It all started with a little idea and a question – could we do this? Could we turn this into a dynamic art display bigger than anything we’ve ever done before?”

The news article went on to share that the new Disney store will open on May 31 and that it “will combine merchandise, ticket sales, and the first-ever interactive Disney Vacation Club Virtual Discovery Station.”

At this time, it remains unknown if this new Disney retail concept will be scaled to include other locations around the United States and the world.

Do you plan to visit the reimagined Disney store concept?