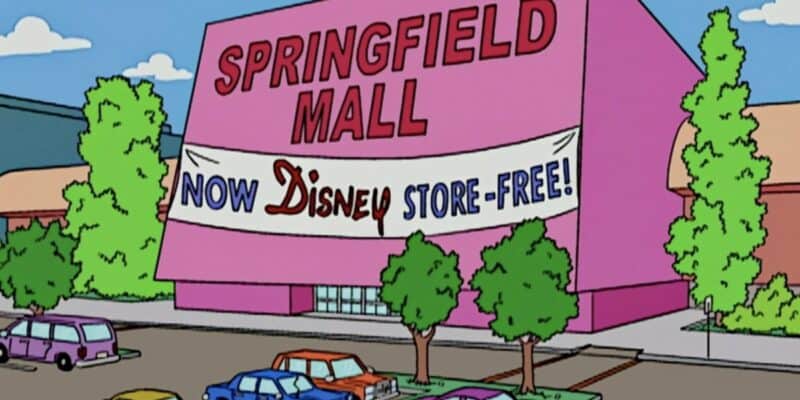 If there is one show that tends to predict the future quite often, it is The Simpsons. Now that Disney owns the franchise, fans can watch the show on Disney+ and witness the future telling firsthand. Recently, we noticed yet another prediction come true from a prior episode, and it has to do with the Disney store closures.

As we now know, Disney stores around the world have closed or are already closing. Disney is moving their consumers to their online platform shopDisney, as well as Target stores where there will be sections of Disney merchandise available for purchase. The closure of the Disney stores worldwide was a massive shock to fans and even sparked some to start petitions to prevent it from happening. Considering merchandise is such a lucrative market for Disney, the choice to close the stores seemed to be unpredictable. Well, unpredictable for everyone but The Simpsons creator Matt Groening.

On Jan 12, 2003, The Simpsons aired season 14, episode 8, “The Dad Who Knew Too Little,” which had an external shot of Springfield Mall with signage that read, “Now Disney Store-Free.” Of course, this was years before we knew Disney would be pulling their Disney stores out of malls, so it seems that this is yet another prediction that came true for The Simpsons.

As per IMDB, the episode’s storyline reads:

Homer realizes he doesn’t know enough about Lisa, so he hires a private detective to learn more about her. This helps with the father-daughter relationship, as Homer knows what she would want to do. However, the detective, Dexter Colt, has charged him $1000, and few of the charges relate to his work (namely, a $40 steak, super-unleaded fuel and silver bullets [the idiot thought Lisa was a werewolf]). Homer, of course, refuses to pay the bill, so Colt breaks into the animal testing lab, and as Lisa is against animal testing, and some of Lisa’s belongings are there, the police assume it was her who did it. Can Homer expose Colt and exonerate Lisa before she’s jailed?

The Simpsons have also now predicted the future of The Mandalorian, as well as confirmed predictions like the Fox acquisition by Disney, Superbowl wins and performances, Donald Trump’s Presidency, and much more.

What other Simpsons predictions have you noticed to come true?