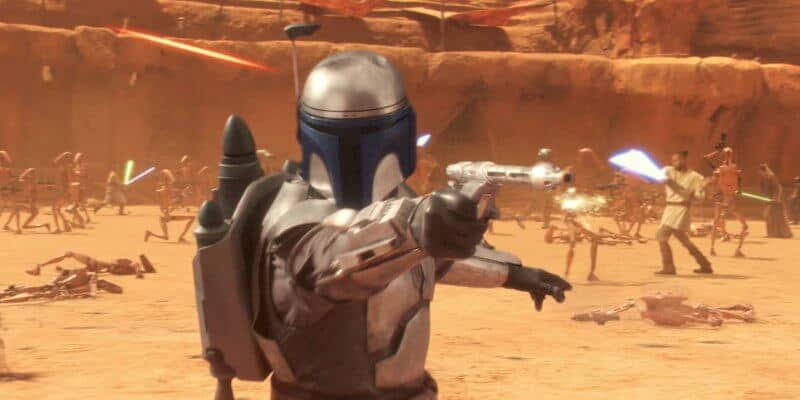 The galaxy far, far away is about to get even bigger with the announcement of a new project in the Star Wars franchise. Amid live-action television shows like the currently airing The Book of Boba Fett and the expanding portfolio of High Republic Era novels, comes a new story set after the fall of the Galactic Empire.

Lucasfilm President Kathleen Kennedy’s Star Wars franchise seems to be sticking around with its post-original trilogy, pre-sequel trilogy era of stories — at least for now. Sure, Dave Filoni’s The Bad Batch is highlighting the direct aftermath of Chancellor Sheev Palpatine’s (Ian McDiarmid) tragic Order 66 execution, and the High Republic novels are homing in on events hundreds of years before Star Wars: Episode I — The Phantom Menace (1999), but for the most part, the Star Wars story is somewhat anchored in the years following Star Wars: Episode VI — Return of the Jedi (1983). That is, until Obi-Wan Kenobi and Andor air later this year.

Creator and showrunner Jon Favreau established this particular part of the Star Wars timeline when The Mandalorian aired in 2019 when Disney+ first debuted. Since then, The Mandalorian Season 2 has aired and The Book of Boba Fett is airing now. If fans look to the future, they’ll see Rosario Dawson’s Ahsoka lined up to continue the events of its bounty hunter predecessors.

And it is not just live-action that keeps this area — that is anything post-ROTJ — of the Star Wars galaxy alive. Projects like LEGO Star Wars Terrifying Tales (2021) saw sequel trilogy favorite, Poe Dameron (Oscar Isaac) return, while new novels like “Star Wars: Shadow of the Sith” (2022) by Adam Christoper is set to explore the life of Jedi Knight Luke Skywalker (played by Mark Hamill on-screen) and Lando Calrissian (played by Billy Dee Williams/Donald Glover on-screen), as the former traces secrets from Exegol. The Sith hideaway planet was the source of much contention when JJ Abrams’ movie, Star Wars: Episode IX — The Rise of Skywalker (2019), was released.

Now, Star Wars fans can head back to The Mandalorian era of the timeline with the upcoming release of the free-to-play video game, Star Wars: Hunters. The arena-battle-style project was announced last year but in further developments, a new novel is set to release as a spinoff of the game — “Star Wars: Hunters: Battle for the Arena” (2022) by Mark Oshiro.

StarWars.com exclusively revealed the cover of the new book. The official synopsis reads:

The story will transport us to the world of Vespaara where newcomer Rieve, a Force-sensitive orphan from Corellia, is finding her footing as a Hunter in the Arena. But it’s not long before her past comes back to haunt her…

Rieve is a dark side warrior and will serve as the anti-hero of the new book. Oshiro explains what type of character Rieve is:

“Rieve is a walking mystery. She’s vague about her past, and she doesn’t like vulnerability. So becoming a Hunter seems like a good idea to her! She can disappear into this Sith Lord persona, and the Arena provides her an outlet for her quietly chaotic powers. She’s very much an anti-hero because she has no interest in others.”

The Star Wars author goes on to describe the inspiration behind the book’s leading character, drawing some surprising comparisons to fan-favorite, multi-generational Star Wars characters.

“As we fleshed out Rieve, I was looking for inspiration from characters like Lando Calrissian, Jango Fett, and even Asajj Ventress from The Clone Wars. I love antagonistic people who have a reason for their antagonism. So I wanted her to be someone who, from another character’s point of view, might almost seem like a villain. As an orphan, she’s used to having to watch her own back, so one of her biggest flaws is her flat-out refusal to trust most people. It’s all part of her drive for self-preservation, but as you’ll see, it also does her a disservice.”

Jango Fett (Temuera Morrison) first appeared in the Star Wars canon in George Lucas’ Star Wars: Episode II — Attack of the Clones (2002) while Asajj Ventress (Grey DeLisle/Nika Futterman) started out in the Star Wars: Clone Wars micro-series before getting a fleshed-out role in the beloved Star Wars: The Clone Wars animated series. It will be intriguing to see how the traits of these popular characters are brought to life in the galaxy’s new antihero.

It is interesting that Star Wars is putting out another story about a lone wolf. Fans have seen Din Djarin (Pedro Pascal) abandon his solitude, taking in the Child Grogu (AKA “Baby Yoda”), and more recently Temuera Morrison’s Boba Fett has defied his own seemingly lonely legacy and teamed up with the mercenary Fennec Shand (Ming-Na Wen). In fact, The Book of Boba Fett‘s finale looks set to play into this Star Wars: Hunters-style battle royale as Shand’s team of warriors looks to take on Cad Bane and the Pyke Syndicate for Tatooine’s Mos Espa.

Whether Rieve will eventually show up in a live-action Star Wars series is unclear. What is obvious is that Star Wars universe, as it has for over four decades, loves to tell stories of — as Mark Oshiro says of his novel — “the power of found families”.

The description of the forthcoming Star Wars: Hunters video game is as follows:

Set after the fall of the Galactic Empire, Star Wars: Hunters will bring players together in thrilling, team-based multiplayer battles. Select from a diverse cast of new characters, including daring Bounty Hunters, heroes of the Rebellion and Imperial stormtroopers. Star Wars: Hunters will be free to download for the Nintendo Switch, on the App Store and on Google Play in 2022.

Will you be reading this new Star Wars book? Let us know in the comments down below!