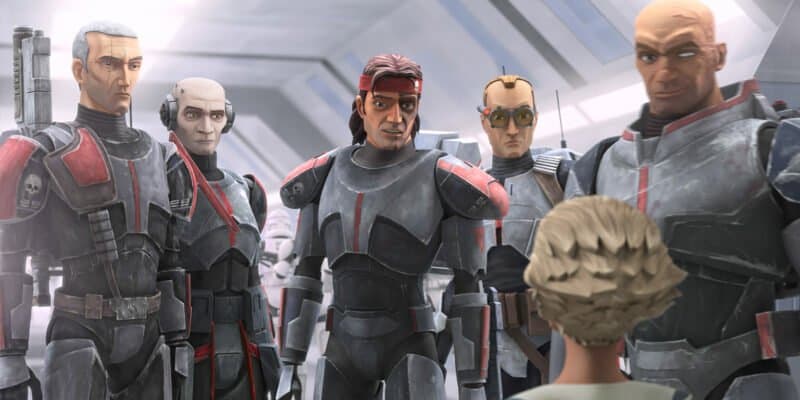 Mandalorian executive producer Filoni previously spoke about about saving the beloved series, telling fans “I hear you” and assuring them that his newest animated endeavor, Star Wars: The Bad Batch, would serve as a continuation:

“This [The Bad Batch] is a response to you guys, the fans. We were creating so much content for Star Wars Clone Wars, and when we finished the series, you guys just kept saying, ‘We want more. Save The Clone Wars’. And, I hear you.”

Season 1, which aired last year, followed Clone Force 99 — Hunter, Wrecker, Echo, Tech, and Crosshair  — immediately after Clone Wars ended. The first episode picked up during the execution of Emperor Palpatine’s Order 66 and fans witnessed the death of Jedi General Depa Billaba at the hands of clone troopers who had faithfully served her for many years.

From the very first episode, in which fascinating new character, Omega, was introduced, The Bad Batch showed Star Wars fans an era they’ve never before seen in the Star Wars franchise, the days immediately after the Republic fell, in which a “sudden, shocking transition” to Imperial power left galactic citizens in flux, with some even looking forward to the Galactic Empire’s reign because it meant the Star Wars galaxy was finally free from war.

The first season explored a variety of topics related to cloning in the Star Wars universe — and even finally confirmed Kamino’s fate, while simultaneously explaining Supreme Leader Snoke’s origin and teasing the official Star Wars canon debut of fan-favorite character Mara Jade — while setting up an explosive second season that is likely to begin on Mount Tantiss.

Star Wars: @TheBadBatch will return for a second season in 2022. Prepare for the two part finale of season one starting tomorrow, only on @DisneyPlus. #TheBadBatch

Star Wars: @TheBadBatch will return for a second season in 2022. Prepare for the two part finale of season one starting tomorrow, only on @DisneyPlus. #TheBadBatch pic.twitter.com/TOs5Lh34bT

Now, a Reddit user has shared a photo from “Star Wars Insider” noting:

The blurb also confirms that both clone trooper voice actor Dee Bradley Baker and Omega performer Michelle Ang will return to star in Season 2. It is also assumed that certain characters who tie into the live-action Star Wars story, including The Book of Boba Fett‘s Fennec Shand (Ming-Na Wen) and Nala Se (Gwendoline Yeo) will return.

At this time, an official release date for The Bad Batch Season 2 has not been confirmed, though some expect it to drop on Star Wars Day, May 4, 2022, following in the footsteps of the first season.

Are you a fan of The Bad Batch?