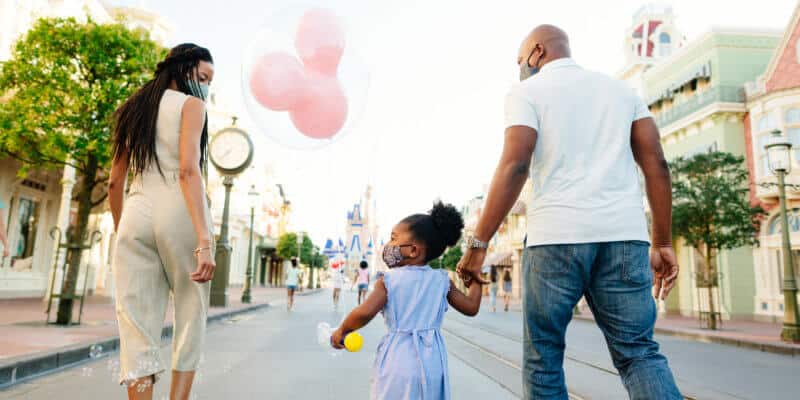 When Walt Disney World Resort in Orlando, Florida and Disneyland Resort in Anaheim, California reopened following their respective pandemic-related closures, there were a number of changes to the traditional Disney Parks experience in the spirit of keeping both Guests and Cast Members safe.

For example, appropriate face masks are still required — in accordance with current CDC guidance — for all Guests age 2 and over, and previously, social distancing measures, including plexiglass dividers on certain rides, were enforced.

Perhaps the most challenging thing to get used to, though, was the new Disney theme park reservation system. The same general process is used at both Walt Disney World Resort and Disneyland Resort, though Disney World’s is known as the Disney Park Pass system [calendar seen below].

Intended to help control capacity in each Disney theme park, the Park Pass system now seems to be a permanent fixture. Some Guests, however, seemingly do not realize this — since other pandemic protocols have been removed and experiences like parades and fireworks shows are returning, it appears that certain Guests think Park Passes have also gone away.

I can’t emphasize this enough. Even if you purchased tickets, you still need to make a park reservation to be able to enter the parks. No exceptions.

I literally just watched a family of four get turned away at the gate for not having a park reservation. (Yes, I moseyed in an hour before closing just to do Jingle Cruise.) The mom threw a fit and held up the line, and the CMs are not going to budge. No, the guests she was holding up behind her weren’t about to back her up, either.

I know how expensive park tickets are. Please don’t pay all of that of money only to not be able to use them.

Yes, you STILL need a park reservation. from WaltDisneyWorld

Nearly 300 commenters weighed in, and many noted that this seems to be a very common problem on both coasts — johnnyringo117 said:

This is so true! We saw people get turned away every day we were there [at Disney World]. Some people even thought when they had a ressie for one park, they could get into ANY park. Know how this works folks, or be prepared to be upset.

Meanwhile, westcoast7654 saw the same problem in the Golden State:

Went to Disneyland in April and saw this happen so many times. I was in line and I overheard them so I was nosy and mentioned that they’d need a reservation and that there they could do it o line maybe before we got to the front if something was open. They didn’t listen and held up the line trying to guilt the workers into letting them in by saying “well, are you going to tell my kids they can’t go to Disney”. The worker said no, that seems like something you should handle.

FreckledFlutist shared their experience, which has been primarily positive:

We go a lot and make reservations months in advance. I can understand the family frustrations especially with the kids, but it’s literally right there on the website. They bombard you with notifications and emails about reserving even after you’ve done it. It’s super easy to do from the app too. Even if you’re not tech savvy, they even send mail to remind you of your trip and make park and dining reservations. Heck they even mention on the Genie service if you have a reservation or not.

If you’re unsure of your reservations before your trip, double-check. Then triple-check.

It is worth noting that Disney does send numerous reminders about Park reservation requirements prior to any vacation. If you want to view Walt Disney World Resort’s calendar for any Park Pass category — Theme Park Tickets, Annual Passholders, or Select Resort Hotel Guests — visit the official website.

What do you think about Disney Parks keeping reservations for the long haul?