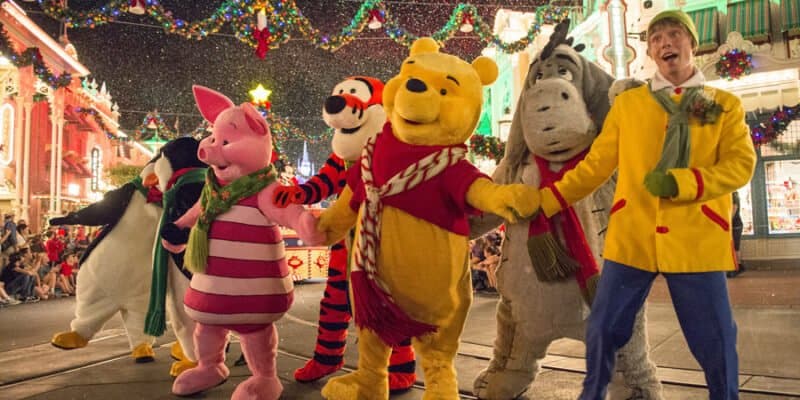 The news everyone has been waiting for — parades are returning to Walt Disney World! (But there’s a bit of a catch).

Yesterday, Disney Parks Blog announced that the fan-favorite Mickey’s Once Upon a Christmastime Parade will be part of Disney’s new holiday event, Disney Very Merriest After Hours, at Magic Kingdom. This will be the first parade to return to Walt Disney World since the Resort reopened after its pandemic closure.

In case you have never seen this parade, Disney describes it as:

Mickey’s Once Upon a Christmastime Parade: Wave to Disney friends during a holiday parade brimming with joy and magic. This jolly procession begins with Mickey and Minnie, and ends with an appearance by Santa Claus himself!

However, as we mentioned earlier — there is a catch. In order to see Mickey’s Once Upon a Christmastime Parade, you must first buy a ticket to the After Hours event, which ranges from $169 to $229 plus tax for select November-December nights and $249, plus tax for December 19 and December 21.

With all of this being said, we were curious as to how fans felt about this news. It is exciting that parades are finally returning to Disney World after over one full year of not hosting them; however, in order to see the parade, Guests must have a ticket to Disney Very Merriest After Hours, which many feel is too expensive.

And Lee C. tagged someone they know in the comments, writing:

we better be able to make it!!!

Twitter user Kat (@nobody_0809) showed how excited they were by Tweeting:

CHRISTMAS PARADES ARE COMING BACK FOR CHRISTMAS AT DISNEY WORLD THIS YEAR IM SO EXCITED TO SEE THEM !!

CHRISTMAS PARADES ARE COMING BACK FOR CHRISTMAS AT DISNEY WORLD THIS YEAR IM SO EXCITED TO SEE THEM !!

Inside the Magic fan, Anthony G. put it simply, writing:

Although many are excited about this, one Twitter user, Emily (@emilyand_disney) expressed how they were confused as to why the parade is returning to Disney Very Merriest After Hours, but why they couldn’t bring them back for Disney After Hours Boo Bash:

I’m confused Disney parks announced today they will be bringing back the Christmas parade, so my confusion is: why would they not do the Halloween parade for Mickey’s boo bash and also not return festival of fantasy?

I’m confused Disney parks announced today they will be bringing back the Christmas parade, so my confusion is: why would they not do the Halloween parade for Mickey’s boo bash and also not return festival of fantasy?

Though, some were upset to hear that the parade would only be included in an event that cost extra money. Inside the Magic follower, Mark B. said:

Disney is ruining everything with menu changes I.e. Ohanas and price gouging now… can’t wait to see what fastpasses are going to cost

The event is four hours long (9 p.m. to 1 a.m., though you can get in as early as 7 p.m.) and gives Guests the opportunity to get in the holiday spirit at Magic Kingdom as fireworks light up the night sky, Mickey and friends ride down Main Street, U.S.A. in Mickey’s Once Upon a Christmastime Parade, holiday overlays will take over select attractions, and more!

For more information on Disney Very Merriest After Hours, visit our website here.