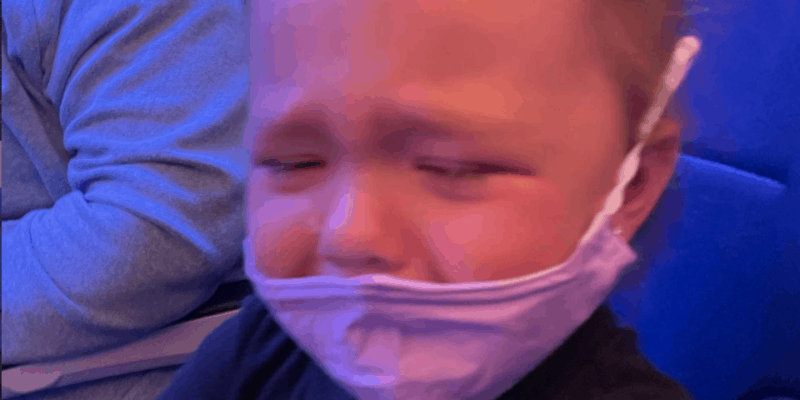 Southwest Airlines has come under fire after a mother was told to “glue” a face mask to her child’s face on a flight out of Orlando International Airport (MCO).

On August 12, the Virginia Beach-based Cleek family was returning home from a Walt Disney World Resort Vacation on Southwest Airlines. After they boarded their flight, they had an experience no parent wants to have during the pandemic era — their two-year-old daughter, Drew, did not want to wear her face mask.

At that point, flight attendants stepped in to enforce Southwest’s face mask policy, which — like Walt Disney World Resort and Disneyland Resort’s face mask policy for Disney transportation — requires Guests age two and over to wear face coverings at all times, unless actively eating or drinking in a stationary position.

The flight attendants, however, seemingly went too far, telling the family they should “glue” little Drew’s mask to her face, and even offering to provide the adhesive themselves.

I can’t believe this happened to us today. You hear about it but never expect it to happen to you.

We boarded our @southwestair flight home (that was 1.5 hours late) with NO AC in Florida when my two year started crying and would not keep on her mask.

Drew is a thumb sucker and her only way she biologically knows how to soothe herself is by sucking her thumb which is damn near impossible with a mask. Well two flight attendants stood over me watching as we held her down and tried to get her to wear it.

Lots of tears from Drew and I. And then it happened… the flight attendant told me two things.

1. We could cut a hole in it (her sarcasm was absolutely ridiculous and infuriating).
OR
2. We could GLUE IT TO HER FACE.

I don’t like being this person. Wearing a mask is the federal mandate… I get it. I respect it. But at some point we have to have human decency. Compassion.

I really don’t have words….. I’m still shaking. And pray to God no one has this kinda situation happen to them.

At this time, Southwest Airlines has not formally responded to the ongoing situation.

Due to the fact that the United States currently has a federal mandate in place requiring face coverings on all transportation, including airplanes, Disney Parks and Resorts are abiding by the same policy. Just as all Guests ages two and up are required to wear face masks on Disney transportation — such as buses, Monorails, and Disney Skyliner gondolas — so, too, are all airplane passengers ages two and up required to wear masks while flying.

Stay tuned to Inside the Magic for more on this story as it develops.