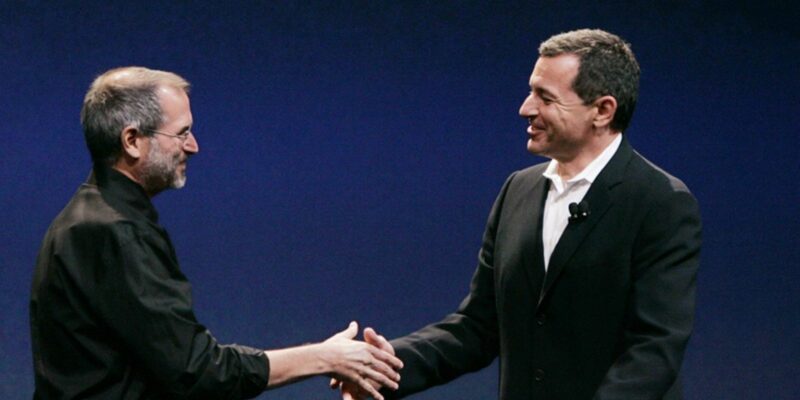 One topic Iger addressed — which hasn’t been oft-discussed since Apple, Inc. founder and CEO Steve Jobs died of pancreatic cancer on October 5, 2011 — was the potential merger of Disney and Apple, which had been on the table at one point in time.

Iger specifically talked about the fact that Disney’s vast content catalog from brands like Lucasfilm/Star Wars, Marvel Studios, National Geographic, and Pixar Animation Studios — which was actually purchased from Jobs himself — would have been a perfect fit for how Apple presents its own content to users.

Iger went on to praise Jobs, who founded Apple Computers with Steve Wozniak on April 1, 1976 in California, noting that the visionary tech entrepreneur loved “everything that Disney did” and was passionate about “the intersection…[of] great technology” and “great creativity.

Iger shared, “That’s what made his heart sing.”

Although the Disney Chairman stopped short of actually addressing what types of products he thinks a Disney-Apple merger would have led to, imagine, for a moment, Disney-branded iPhones and iPads that would come equipped with an exclusive Disney+ streaming platform UI.

In his chat with CNBC, Iger also addressed rampant rumors that he will step back in as Disney CEO, taking back the reigns from sitting Chief Executive Officer Bob Chapek, who took the post in early 2020 immediately before the COVID-19 pandemic wreaked havoc on Disney’s operations worldwide.

Iger indicated that Chapek will see Disney Parks, Disney movies, Disney+ Original series, and all other departments into the future:

“Look the world is changing dramatically and it’s important for the CEO of the company to address all of those changes rapidly, Bob [Chapek] is going to address them probably differently perhaps than I may have, but that’s neither good nor bad.”

As for Iger, he has previously shared, “I am not retiring. I can’t possibly do that”, so suffice it to say we certainly haven’t heard the last from the popular executive as he moves forward outside of the “Disney bubble”.

What do you think? Would Apple and Disney have merged?