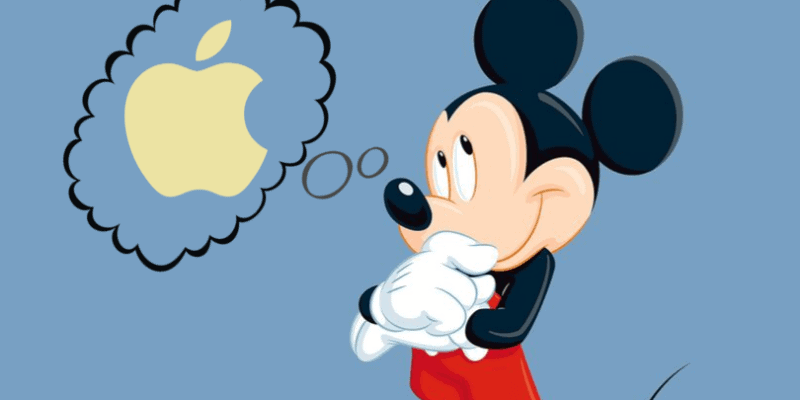 Disney has merged with plenty of companies since Bob Iger became CEO well over a decade ago. Fans have seen The Walt Disney Company acquire Lucasfilm, Marvel Studios, Pixar, and Fox in the past two decades. And now, Iger has admitted that if Steve Jobs were still alive, Disney would want to merge with Apple.

In a passage from his autobiography published in Vanity Fair, the current CEO and Chairman of The Walt Disney Company wrote about his friendship with Jobs and the Disney-Apple merger that never came to be.

The passage published in Vanity Fair shares details of Iger’s close relationship with Jobs, which came to be when Disney decided to acquire Jobs’s other company, Pixar. Iger recalls his first visit to Jobs’s office at the Pixar campus to be one of the greatest days of his life:

If I had to name the 10 best days I’ve ever had on the job, that first visit would be high on the list. What I saw that day left me breathless—the level of talent and creative ambition, the commitment to quality, the storytelling ingenuity, the technology, the leadership structure, and the air of enthusiastic collaboration—even the building, the architecture itself. It was a culture that anyone in a creative business, in any business, would aspire to. And it was so far beyond where Disney Animation was and beyond anything we might be able to achieve on our own that I felt we had to do all we could to make this happen.

But even once Iger and Jobs decided to join forces and make the Disney-Pixar merger a reality, it wasn’t all good news. Iger details a conversation the two had back in 2006 when he met Jobs in Emeryville to announce Disney’s acquisition of Pixar. That day, Jobs told Iger that his cancer had relapsed. Iger writes:

“Steve,” I said, “why are you telling me this now?” “I am about to become your biggest shareholder and a member of your board,” he said. “And I think I owe you the right, given this knowledge, to back out of the deal.” … It was impossible to be having these two conversations—about Steve facing his impending death and about the deal we were supposed to be closing in minutes—at the same time.

Iger explains that Jobs had offered him the opportunity to back out of the Pixar deal, but that he didn’t take him up on the offer. But later in the passage, Iger admits that he wishes Jobs were still alive to this day, both to experience the success of both of their companies as well as to merge together.

With every success the company has had since Steve’s death, there’s always a moment in the midst of my excitement when I think, I wish Steve could be here for this. It’s impossible not to have the conversation with him in my head that I wish I could be having in real life. More than that, I believe that if Steve were still alive, we would have combined our companies, or at least discussed the possibility very seriously.

Even though some may find it hard to believe that Disney and Apple would ever merge, it isn’t too far fetched. Analysts have speculated that the two companies would join forces for years, although now the size of the two giants might make a deal impossible nowadays.

Still, if Apple were to ever acquire Disney, some say it would be the biggest deal of all time.

What do you think: would a Disney-Apple merger be possible of Jobs was still alive today? Let us know in the comments!