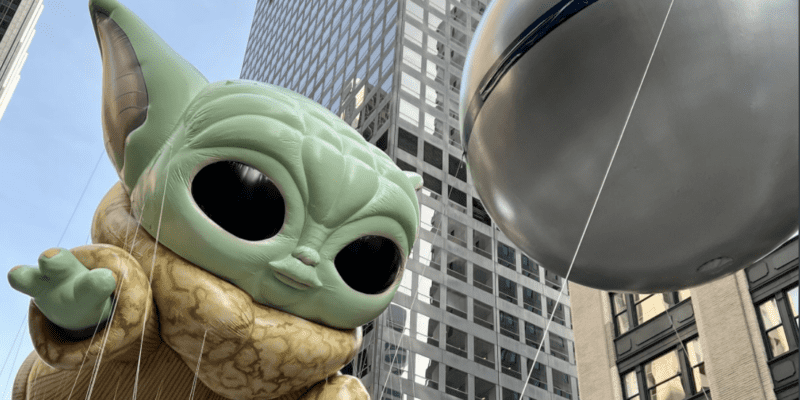 We previously reported on the Grogu (AKA “Baby Yoda”) Funko POP! inspired balloon that made its way through the streets of Manhattan to Herald Square for the first time, but fans were also delighted by a Star Wars: Galaxy’s Edge balloon that had an augmented reality component.

Now, the fandom is taking to social media to express their happiness at seeing the Star Wars story become larger-than-life in one of America’s most celebrated holiday traditions.

This parade is taking this Star Wars thing to a whole new level this year. #StarWars #MacysParade @Macys @starwars

This parade is taking this Star Wars thing to a whole new level this year. #StarWars #MacysParade @Macys @starwars pic.twitter.com/v9blaUiUB4

Brightnia Libbyana was brought to tears by the cuteness of the porg that cantina owner Seezeleslak was holding. The character is featured in both Galaxy’s Edge lore and in the epic Star Wars: Tales From the Galaxy’s Edge virtual reality game, which is available on Oculus Quest devices:

We did it guys!! There was a porg in Macy’s Thanksgiving Day Parade!!

We did it guys!! There was a porg in Macy's Thanksgiving Day Parade!!

Related: The Cantina Wars: Is a Second Establishment Coming to Rival Oga’s at Disneyland?

Logan posted a hilarious meme of Han Solo (Harrison Ford) in the Star Wars sequel trilogy — specifically Episode VII – The Force Awakens (2015) — in which the iconic pilot says, “This is not how I thought this day was going to go.” The accompanying Tweet caption reads:

They just said “where’s Han Solo” on the macys day parade when the millennium falcon showed up. #StarWars

They just said “where’s Han Solo” on the macys day parade when the millennium falcon showed up. #StarWars pic.twitter.com/DJfyR0sdf3

RidesTheQ46 shared photos of the stormtroopers who led the Grogu balloon — with his now-iconic pod stroller — through New York. Although the troopers weren’t the same Dark Trooper squad who kidnapped “The Child” from Din Djarin (Pedro Pascal) on planet Tython in The Mandalorian Season 2, the effect was not lost:

Billie summed up most fans’ thoughts with the post:

The Millennium Falcon just now at the #ThanksgivingDay #Parade was absolutely an amazing display!

The Millennium Falcon just now at the #ThanksgivingDay #Parade was absolutely an amazing display!

The official Star Wars website shares the following details about Batuu — the planet where Galaxy’s Edge is set at both Disneyland Resort and Walt Disney World Resort:

“This remote outpost on the galaxy’s edge was once a busy crossroads along the old sub-lightspeed trade routes, but its prominence was bypassed by the rise of hyperspace travel. Now home to those who prefer to stay out of the mainstream, it has become a thriving port for smugglers, rogue traders, and adventurers traveling between the frontier and uncharted space. It’s also a convenient safe haven for those intent on avoiding the expanding reach of the First Order. While Batuu may be new to us, it is clearly already familiar to many characters from the Star Wars saga as a stepping-off point for epic adventures.”

You can read more about the Macy’s Thanksgiving Day Parade on its official website. Did you enjoy this year’s Star Wars additions?