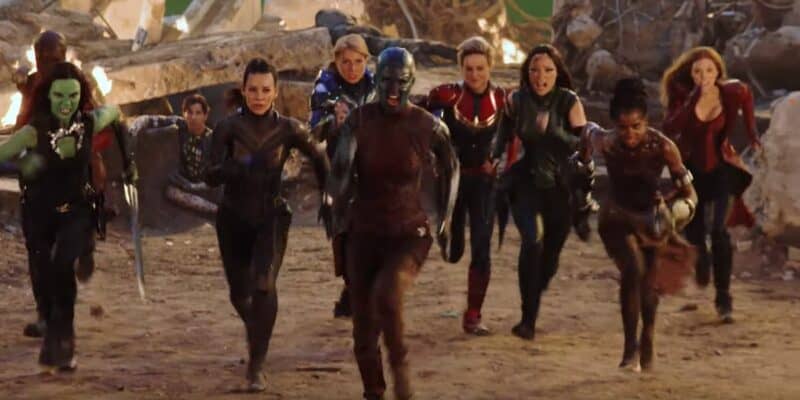 Particularly for female super hero fans, the all-women scene in Avengers: Endgame (2019) was a groundbreaking moment in the Marvel Cinematic Universe. While the Avengers franchise has never shied away from strong female characters — hello, Carol Danvers/Captain Marvel (Brie Larson) — this specific scene was the first time many of the MCU’s leading ladies had appeared together.

Now, Endgame producer Trinh Tran has shared details about the “Female A-Force Scene” in the new “The Story of Marvel Studios: The Making of the Marvel Cinematic Universe” coffee table book set.

Tran first discussed that this scene was a long time coming:

“One of the most memorable moments from the climax of Endgame underlined Marvel Studios’ to showing heroic acts performed by all people.The teaming up of Captain Marvel [Brie Larson], Wanda Maximoff [Elizabeth Olsen], Valkyrie [Tessa Thompson], Okoye [Danai Gurira], Pepper Potts [Gwyneth Paltrow], Mantis [Pom Klementieff], Shuri [Leticia Wright], The Wasp [Evangeline Lilly], Gamora [Zoe Saldana], and Nebula [Karen Gillan] was in the script for Endgame since day one. ‘We’ve always wanted a moment to really showcase and empower the women [in the MCU].’”

However, per Tran, there were “concerns” about how the scene would be received and it was, at one point, almost removed from the final cut of Endgame, but Tran pushed to include it, noting that “additional photography elevated the initial concept”:

“However, when Endgame went into postproduction, the sheer joy for the sequence shifted to a more pensive place. In earlier cuts, Tran admits, ’When we started screen-testing it, there was a little concern for ‘Does it come off [as]pandering?’ Are we going to get people saying, ‘Oh you’re just putting that scene in there just to put the scene in there. Does it actually have a story to tell with the rest of the narrative?’ That was always a concern in the back of our heads.'”

As for the future of these characters in the MCU, many of the ladies will be making their returns sooner rather than later.

Zoe Saldana will be back in James Gunn’s Guardians of the Galaxy: Vol 3. with costars Chris Pratt (Peter Quill/Star-Lord), Dave Bautista (Drax the Destroyer), Bradley Cooper (Rocket the Raccoon), and Vin Diesel (Groot).

Finally, Elizabeth Olsen will be reprising her role as Scarlet Witch in the highly anticipated Doctor Strange In the Multiverse of Madness (2022) alongside the ever-popular Benedict Cumberbatch (Doctor Stephen Strange).

You can watch the full “Female Avengers Unite” scene below:

The epic conclusion to the Infinity Saga that became a critically acclaimed worldwide phenomenon, this dramatic showdown pits the Avengers against Thanos [Josh Brolin]. After devastating events wiped out half the world’s population and fractured their ranks, the remaining heroes struggle to move forward. But they must come together to restore order and harmony in the universe and bring their loved ones back.