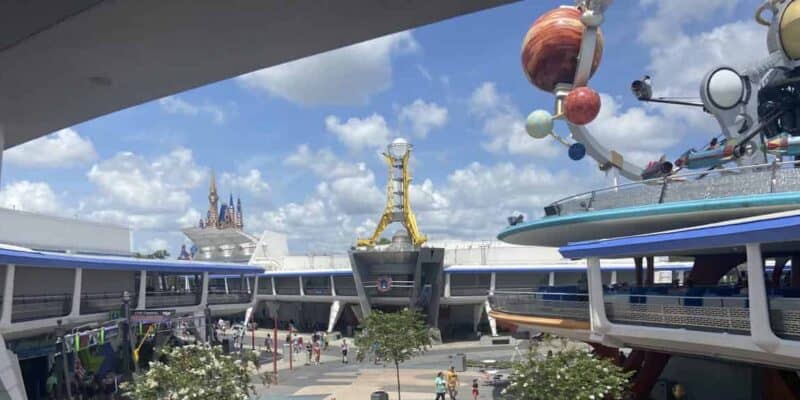 During the Walt Disney Company Q3 earnings call, it was mentioned that Disney World, which has been open for more than a year, is still seeing a “strong per cap growth continue in the Park”. However, with this being said, it is clear that crowds are not as they were earlier this summer or even just a few weeks ago.

We have recently reported on decently low wait times at Walt Disney World compared to earlier in the summer, and with that, we are also seeing very low crowds at the theme parks.

I visited the theme parks at Walt Disney World this week and in each Park, I noticed there were barely any crowds or high wait times.

On Monday, August 30, I was in Magic Kingdom where I noticed a huge decrease in crowd levels. Walking into the theme park, as seen in the photo above, there was barely anyone around (and that is with a cavalcade coming down Main Street, U.S.A.).

Over in Tomorrowland, the low levels continued as wait times were only 5-10 minutes! In the photos below, you can see how crowded this area of the theme park was on Monday.

Fantasyland, which is one of the busiest parts of Magic Kingdom, wasn’t crowded either. You can see in the image below that there were some Guests walking through, but compared to what it usually looks like — this is nothing!

In Liberty Square, near Hall of Presidents and Liberty Tree Tavern, I noticed there were some Guests walking to and from Main Street, U.S.A., but again, compared to what the crowd levels were earlier this summer, it felt like Magic Kingdom was abandoned!

While waiting for Happily Ever After, I noticed some Guests lining up along Main Street, U.S.A., but just a half-hour before the start of the nighttime spectacular, I snapped the photo below which shows barely anyone compared to what it’s been.

On Tuesday, August 31, I headed to Hollywood Studios, where again, I noticed a huge lack in crowds! At Park opening, though there were a handful of Guests walking in, it really was not busy at all.

And in Galaxy’s Edge, for example, there was barely anyone visiting or gathered around, which you can see in the photo below.

Another busy area of the theme park is Toy Story Land; however, when I went to visit Andy’s toys earlier this week, it wasn’t nearly as crowded as it usually is!

On Wednesday, September 1, I went to EPCOT to check out the Food & Wine Festival. The front of EPCOT at Park opening wasn’t nearly as crowded as it usually is as Guests tend to stop for photos in front of Spaceship Earth. Additionally, Spaceship Earth posted a 0-minute wait time — something you rarely see at Disney World.

The Land pavilion was not as busy as it usually is either. Living with the Land has remained closed unexpectedly for nearly two weeks, but Soarin’ Around the World is still open and operating for Guests.

Over in World Showcase, I was expecting it to be a bit busier as the Food & Wine Festival is currently going on, but much to my surprise, it felt deserted!

And lastly, Disney’s Animal Kingdom was completely empty when I visited on Thursday, September 2. Wait times never exceeded 25-minutes and there was a huge lack of Guests throughout.

We do want to note that at the time of publication, we still have yet to hear an exact number when it comes to Park capacity, but that last confirmed number was 35%, which was released earlier this year.

Have you recently visited Walt Disney World? How was your experience with crowds? Let us know in the comments below.