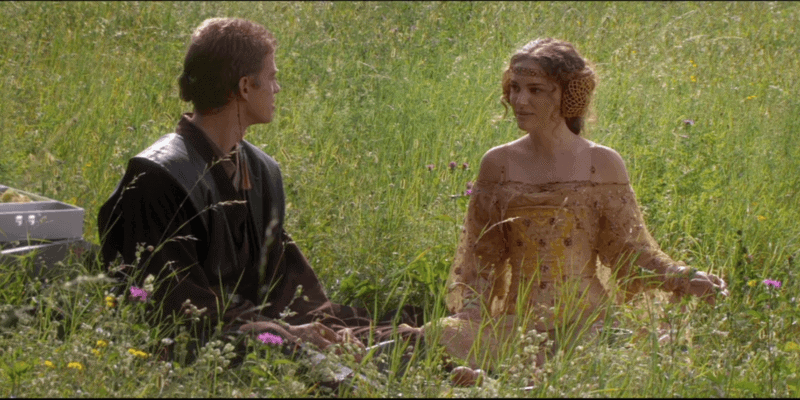 "You going to use one of your Jedi Mind Tricks on me" -Padme (Credit: Lucasfilm)

Star Wars and Mission: Impossible are both incredibly popular film franchises, but they don’t seem to have a clear connection to one another, at least at first.

But, beyond the fact that they started during the same general era, both Star Wars and Mission: Impossible have a more recent connection, as well. They both filmed at the same amazing Italian castle!

One article on the little-known link between the two IPs noted:

For scenes shot in Naboo, one of the real-world locations included the Caserta Palace in Italy that doubled as the Queen Padme’s palace in the capital city of Theed.

According to the official Star Wars website, director George Lucas shot the interiors of the Theed palace in the 18th century-era Caserta because ‘he was looking for an Italian Renaissance appearance for the planet Naboo.’ The location has also found its way in other Hollywood productions, like Mission Impossible III and Angels & Demons, in which the palace served as the Vatican.

When construction started in 1752, the Royal Palace of Caserta became the largest palace, and one of the largest buildings erected in Europe during the 18th century. With its size of 45, 000 s.q.m. (484,376 sq.ft. or approx. 11 acres) and height of 36 meters (118 feet or 5 floors), it takes some time to explore. The building’s highlights include Sala del Trono (literally “throne room”, a large area used for reception and accommodation for important guests), the royal staircase, the Palatine Library, and the garden. The garden at the back of the palace is modeled after the park of Versailles and features many impressive fountains like the ones featuring Venus and Adonis, from Shakespeare’s poem. Due to the size of the park it can be advisable to take the shuttle bus to the back of the park to see the waterfall.

The grounds of the impressive property also served as the Lake Retreat where Padme and Anakin Skywalker (Hayden Christensen) spent time together after visiting her family home in Theed.

The Palace stood in again for the ‘Vatican’ in Ron Howard’s film of Angels And Demons but the chances are that if its imposing marble pillars and staircases seem familiar, that’s because Caserta was also used for the interior of the Theed Palace in both Star Wars Episode 1: The Phantom Menace and Star Wars Episode 2: Attack Of The Clones. Older moviegoers may recognise it from Sergei Bondarchuk’s 1970 epic Waterloo, with Rod Steiger as Napoleon and Christopher Plummer as the Duke Of Wellington.

Even if you didn’t know much about Caserta Palace previously, the odds are good you’ve seen this stunning location on-screen more than once!

Retired from active duty, and training recruits for the Impossible Mission Force, agent Ethan Hunt (Tom Cruise) faces the toughest foe of his career: Owen Davian (Philip Seymour Hoffman), an international broker of arms and information, who is as cunning as he is ruthless. Davian emerges to threaten Hunt and all that he holds dear — including the woman Hunt loves.

The official description of The Phantom Menace reads:

Anakin wins a thrilling Podrace — and with it his freedom as he leaves his home to be trained as a Jedi. The heroes return to Naboo, where Anakin and the Queen face more deadly forces, while the two Jedi contend with the deadly foe Darth Maul [Ray Park]. Only then do they come to realize the invasion is merely the first step in a sinister scheme by the reemergent forces of darkness known as the Sith.

The official description of Attack of the Clones reads:

Watch the seeds of Anakin Skywalker’s transformation [into Darth Vader] take root in Star Wars: Episode II – Attack of the Clones. Ten years after the invasion of Naboo, the galaxy is on the brink of civil war. Under the leadership of a renegade Jedi named Count Dooku [Christopher Lee], thousands of solar systems threaten to break away from the Galactic Republic.

When an assassination attempt is made on Senator Padme Amidala, the former Queen of Naboo, twenty-year-old Jedi apprentice Anakin Skywalker is assigned to protect her. In the course of his mission, Anakin discovers his love for Padme as well as his own darker side. Soon, Anakin, Padme and Obi-Wan Kenobi are drawn into the heart of the Separatist movement and the beginning of the Clone Wars.

Were you familiar with Caserta Palace and its major role in the movie industry?