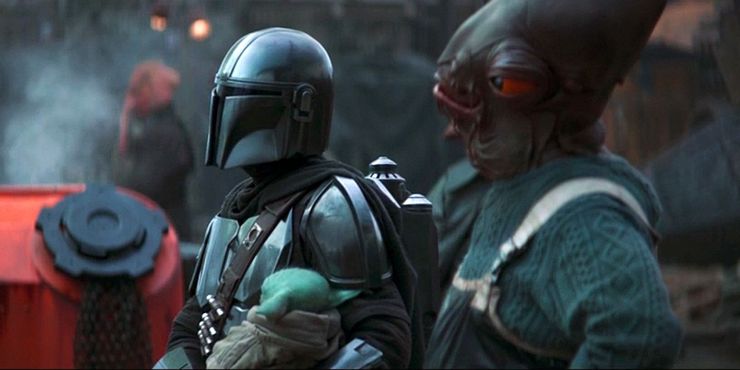 As bounty hunter Din Djarin (Pedro Pascal) and his tiny charge Grogu (AKA “Baby Yoda”) made their way across the Star Wars galaxy, though, they also encountered a number of new characters — some of whom made a big impact even though they didn’t get much screentime in showrunner Jon Favreau and executive producer Dave Filoni’s hit series.

One such character appeared in Bo-Katan’s debut episode, “Chapter 11: The Heiress”, directed by Bryce Dallas Howard. The Mon Calamari dockworker — and his sweater — became an instant fan-favorite, sparking memes across the internet.

Now, one Star Wars fan has discovered the exact sweater the unnamed dockworker wore on planet Trask on none other than Amazon.com — they really do sell everything.

I AM LAUGHING MY BUTT OFF

I AM LAUGHING MY BUTT OFF

I FOUND THE MANDALORIAN MON CALAMARI SWEATER ON AMAZON ($30 👀) AND THIS WAS THE FIRST REVIEW pic.twitter.com/5pR53XkBrS

The sweater was perfect for keeping me warm and dry during my shift on the cold wet docks out here on the moon of Trask. I was also pleasantly surprised to see that it doubles as high fashion!

Bought navy blue for a The Mandalorian cosplay. It’s the same design as used in the show for the Mon Calamari at the docks. Could be the same sweater. Looks screen accurate and very comfortable. I’m a fisherman as my day job so this seemed like a natural cosplay and I already had the bibs. Just need to eliminate the “grundens” lettering and it’ll be ready to go

Back on Twitter, people can’t get enough of the review.

I keep meaning to start an Amazon reviews review and this is better than any of the reviews I've ever screencapped or found 🤷🏼‍♀️ https://t.co/QlpQrXkKzm

Now we can all be sweater guy

Now we can all be sweater guy😂 https://t.co/MoN8bxzoD3

Sure, I’m 3 glasses of Prosecco in- but this has had me in stitches for the past 10 minutes #Vogue

Sure, I’m 3 glasses of Prosecco in- but this has had me in stitches for the past 10 minutes #Vogue https://t.co/3x9jyxLRUD

As for whether we’ll ever see the unidentified dock worker again, only time will tell. Although few details about The Mandalorian Season 3 or its spinoffs — The Book of Boba Fett and Ahsoka — have been confirmed, the main series is expected to continue following the ongoing Darksaber storyline.

Following the Season 2 finale episode, “Chapter 16: The Rescue”, Djarin now wields the black-bladed saber, but both Bo-Katan and Moff Gideon (Giancarlo Esposito) are desperate to regain ownership of the ancient Mandalorian weapon, as whoever honorably possesses it is the de facto ruler of Mandalore.

Exact debut dates for The Mandalorian Season 3 and Ahsoka have not been confirmed. The Book of Boba Fett will air in December 2021.

What do you think about this hilarious Amazon review?