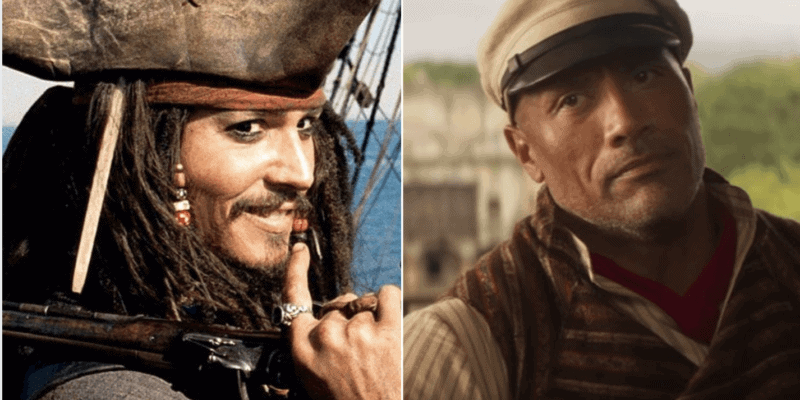 Disney’s latest film, Jungle Cruise, was officially released on July 30, 2021 on both Disney+ Premier Access and in movie theaters.

Related: Dwayne Johnson Speaks Out On If He Plans to Sue Disney For ‘Jungle Cruise’ Release Plan

The movie — based on the Disney Parks attraction of the same name — has done well, raking in about $90 million at the box office opening weekend.

Now, Jungle Cruise star Dwayne ‘The Rock’ Johnson is leaning into the comparisons Disney’s newest live-action film has drawn to another popular franchise, Pirates of the Caribbean.

Been a real (humbling) joy to share how JUNGLE CRUISE has been a 20 year career dream come true.

20yrs ago I went to watch my first starring role THE SCORPION KING in theaters and saw the PIRATES OF THE CARIBBEAN trailer and I was instantly inspired and motivated to work my a** off.

And hopefully one day I can make my own global adventure that was based off of an iconic, beloved Disney attraction

And costar with one of the greatest actors of our generation, in Emily Blunt…..

…who’s just laying in wait just to drop that Johnny Depp eyeliner joke on me.

At the end of the video that accompanies the post, Johnson hilariously shared a graphic of him digitally “wearing” a Captain Jack Sparrow costume, complete with the famous eyeliner that Depp wore for the part in all five Pirates of the Caribbean movies so far, beginning with Pirates of the Caribbean: The Curse of the Black Pearl (2003).

Last November, Depp lost his libel case in the U.K. High Court, with Justice Andrew Nicol presiding, after U.K. News Group Newspaper publication, The Sun, printed an article alleging that Mr. Depp had engaged in domestic abuse against Ms. Heard on multiple occasions, even reportedly holding her “hostage” during a Pirates shoot in Australia.

At this time, Disney has fired Depp from his iconic role, though the Hollywood actor’s many supporters have launched a petition for him to return as Captain Jack Sparrow.

Don’t forget you can currently catch Jungle Cruise streaming on Disney+ Premier Access or at your local movie theater! The official description reads:

Join fan-favorites Dwayne Johnson and Emily Blunt for the adventure of a lifetime on Disney’s “Jungle Cruise”, a rollicking thrill-ride down the Amazon with wisecracking skipper Frank Wolff and intrepid researcher Dr. Lily Houghton. Lily travels from London, England to the Amazon jungle and enlists Frank’s questionable services to guide her downriver on La Quila — his ramshackle-but-charming boat.

Lilly is determined to uncover an ancient tree with unparalleled healing abilities — possessing the power to change the future of medicine. Thrust on this epic quest together, this unlikely duo encounters innumerable dangers and supernatural forces, all lurking in the deceptive beauty of the lush rainforest. But as the secrets of the lost tree unfold,  the stakes reach even higher for Lily and Frank and their fate — and mankind’s — hangs in the balance.

What do you think about The Rock being inspired by Johnny Depp’s Jack Sparrow?