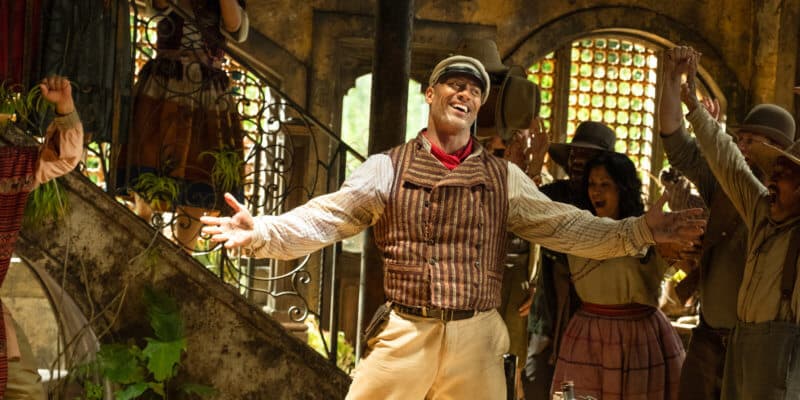 Step aboard, River Cruise fans, for the journey of the year! Disney’s Jungle Cruise officially sets sail this Friday, July 30, with Skipper Frank (Dwayne Johnson) at the helm.

While you’re watching the film, keep your eyes peeled for these Jungle Cruise attraction and Adventureland Easter egg references that you’ll want to see! Can you spot them all?

Ready to take in the 9th wonder of the world? The Adventureland-themed film has so much eye candy, from fight scenes to pratfalls to digitally animated magic. Keep your eye out for these “Easter egg”-type treasures among the plot points!

The original Jungle Cruise trailblazer, Dr. Albert Falls is the famed discoverer of Schweitzer Falls, the “Backside of Water” feature. His fame deepens within Disney’s new film because you’ll see (and hear) his name several times. While Dr. Falls never makes an appearance, Jungle Cruise fans will love the name-drop.

Our favorite head salesman of the Jungle gets a revamp and a gender change. We speculated that Trader Sam would indeed be a female when the movie poster was released, and we were right! Veronica Falcón, who plays Sam, absolutely nails the part, bringing in the nostalgia we crave as well as new depths of personality.

Whatever happened to Rosita? Well when she’s not visiting the Tropical Hideaway at Disneyland Park, she’s been flying around with pseudo villain, Nilo.  Many Adventureland enthusiasts will holler from their seats when they hear the Cockatoo’s name because it’s not just any new character. This is a beloved reference from The Jungle Cruise’s attraction neighbor, Walt Disney’s Enchanted Tiki Room.

Collider sat down with Paul Giamatti, who plays Nilo in the film, and he had this to say about his fine feathered friend,

“I have a cockatoo in the movie. I had wanted to have a monkey, I thought, at first. And then monkeys were going to be too difficult. And then I wanted to have some kind of an animal and I had worked with birds before and somebody suggested the cockatoo and I thought, “Oh, that’s a really good idea.” And so I have a really amazing, beautiful cockatoo in the movie, she’s amazing. She’s a lot of fun and she has a sort of key little thing throughout the sequence. She talks and the bird actually talks, but they’re going to have to actually fake a lot of her talking, but she’s amazing. The bird is beautiful and really, really well-trained. And she does all kinds of little funky things with me. The birds actual name is Lover, but the bird in the movie her name in the movie is Rosita.”

BEHOLD! The eighth wonder of the world, the BACKSIDE OF WATERRRR!

Dwayne “The Rock” Johnson promised us that this original joke would make it into the film, and he delivered. While the circumstance is slightly more contrived than the attraction’s version, the punny nonsense delivered by theme park Skippers is 100% present and accounted for. We loved it!

As Disney increases the visibility of a wider array of characters, we’re taking in this coming-out moment given by Dr. Lily Houghton’s brother, MacGregor. The tender feelings shared on the banks are sad, heartfelt, and all too often the truth of many. Whitehall left a quote with the press during an official film junket, saying,

“I think it was a scene that we really wanted to get right…I think that what’s so great about his movie is that all of the characters feel so fleshed out and all of them have distinct backstories and are fully realized. And, you know, in a lot of movies in this kind of genre, sometimes you have characters that are a little bit kind of two-dimensional. But I think it’s so great that we get to understand so much about each of these characters and they all have reasons for being where they are and, you know, interesting and rich, textured backstories and things we’re invested in. And it makes you care about them, and it makes you really go on a journey with them.”

An enormous set was revealed via drone in 2018, built in the state of Hawaii. Consisting of outbuildings, at least three docks, and water walkways, the Jungle Cruise set you see in the movie is not a green screen, but a real structure on the banks of a river. Watch all the cast and extras teeming about on the life-size patios, careening over docks, and eventually, all the action that unfolds! 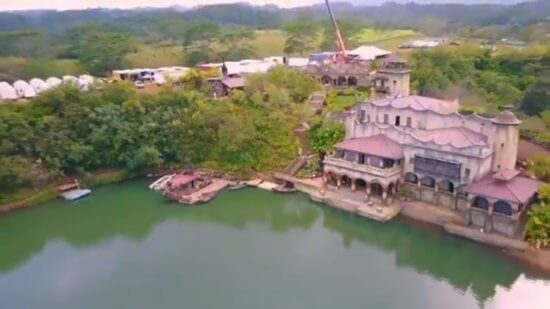 Remember, you can set sail with Disney’s Jungle Cruise on both Disney+ (with Premier Access) and in theatres everywhere on July 20th, 2021. Jungle Cruise will be available to subscribers at no charge on November 12, 2021.

Will you be watching Jungle Cruise this week? Leave us a comment about what you are excited to see in the movie!