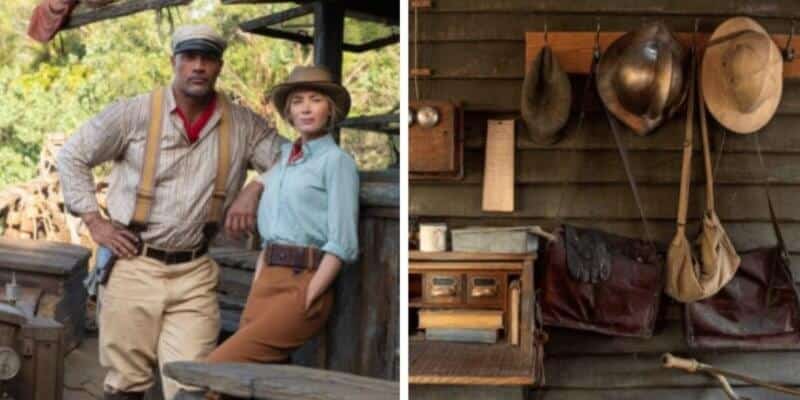 If you are a fan of the Jungle Cruise attraction and are pumped to see the all-new film hit theaters on July 30, then you will be ecstatic to know that the film will have some hidden easter eggs at the Jungle Navigation Company.

Although Disney’s Jungle Cruise film and attraction do not follow the same storyline, the Jungle Cruise attraction at both Disney World and Disneyland have both underwent a reimagining to remove the previously culturally insensitive storyline, which meant that Disney was not only able to adjust the story, but they were able to add in new details and easter eggs from the film as well.

At the moment, it seems that the easter eggs can be found in Disneyland’s version of the attraction, but as Disney World’s version is still undergoing change, Disney noted we would see some there in the future, as well.

Disney Parks Blog noted a few of the easter eggs, and unless you read along, you may not pick up on all of them.

Skipper Frank’s (Dwayne Johnson) clothing from the film can be found in the queue, right outside Alberta Falls’ office.

A set of clothing worn by Skipper Frank Wolff (Dwayne Johnson) and intrepid researcher Dr. Lily Houghton (Emily Blunt), pictured in the image above, hangs on coat pegs behind Alberta Falls’ office door in the Jungle Cruise boathouse. Frank’s jacket also hangs on the wall in Alberta’s office, behind a wicker hutch.

There may be many hats in the Jungle Cruise ride, but one certain helmet has a special meaning.

A Conquistador’s helmet hangs in the Safari Supply Storage Room. In the film, one of the innumerable dangers and supernatural forces that Frank and Lily encounter is a group of Conquistadors, led by Aguirre (Edgar Ramirez).

One map, in particular, may have Guests taking a double-look.

On the opposite wall from Society of Explorers and Adventurers member Dr. Kon Chunosuke’s entomological collection is a map that Lily brought to Frank in the film, in which maps play a big role. This map guides Frank and Lily in their adventure of a lifetime down the Amazon. They are determined to uncover an ancient tree with unparalleled healing abilities – possessing the power to change the future of medicine.

There are seemingly more easter eggs for Guests to find, but the rest are up to you! Also, remember that with the reimagining of the attraction came the heavy implementation of the Disney Secret Society of Explorers and Adventurers storyline, which connects many of the Disney attractions around the world through the fictionalized characters created for each respective ride! So there are plenty of easter eggs to keep you busy while waiting in the queue.

Are you a fan of finding easter eggs on attractions at Disney? Let us know in the comments below.