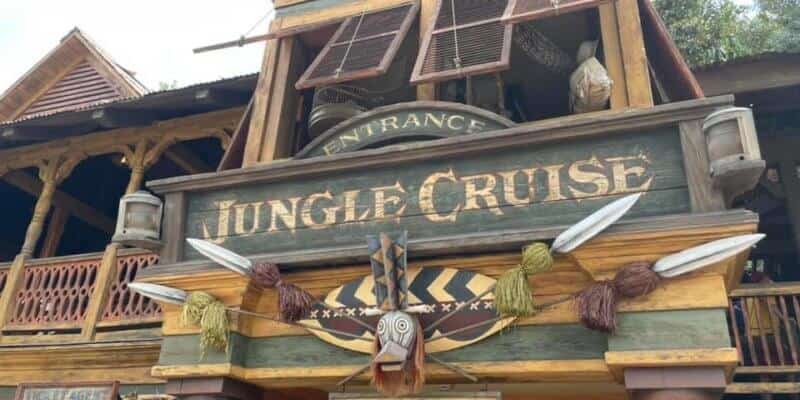 Ever since Disneyland reopened on April 30, one of the theme park’s most popular attractions has remained closed. Disney’s world-famous Jungle Cruise has been going through a major overhaul and refurbishment. Finally, on May 26, 2021, Disney announced that the ride would finally be reopening on July 16.

However, it looks like things may already be done, and it is possible that the theme park ride may open earlier than scheduled! Disney Parks Blog shared new photos of the Jungle Cruise’s enhancements and also shared a tip:

Imagineers could be monkeying around a bit, up until the tour officially opens on July 16. Here’s a tip we got from the dock: Disneyland skippers are getting up to speed in their tramp steamers, and there’s a chance you may get to stow away on an early expedition starting today!

Some Disneyland Guests have since taken to social media to share that the attraction is indeed open!

Twitter user David Vaughn shared a video from the ride:

The Jungle Cruise is OPEN at Disneyland! The ride is scheduled to reopen Friday, July 16 but has a soft opening starting today #Disneyland #JungleCruise

The Jungle Cruise is OPEN at Disneyland! The ride is scheduled to reopen Friday, July 16 but has a soft opening starting today #Disneyland #JungleCruise pic.twitter.com/OHUR9UqmlG

In addition to the exciting news that the Jungle Cruise has had a soft-opening, Disney also shared some new photos of the reimagined attraction. Including Trader Sam’s Lost & Found Gift Shop, monkey’s taking over a discarded cruise boat, and the well-known travelers who find themselves at the wrong end of a rhino’s horn.

Walt Disney World’s version of the Jungle Cruise has also been undergoing some reimagining to be more culturally aware, but the ride has remained open as the work is being done. If you want to take a bigger behind-the-scenes look at the newly reimagined ride, check out the video shared by Disney below!

Disneyland Ambassadors were also able to ride the Jungle Cruise early and shared the exciting video — that also included some of the dry humor that Jungle Cruise skippers are famous for.

Skippers are preparing for the reopening of the Jungle Cruise on July 16 so we joined them on the river to see exactly how they were hard at work. Despite elephants and hippo pools, we were able to capture a bit of “dry” humor.
#DisneyCastLife
#JungleCruise
#Disneyland

While, according to the Disneyland app, it is not confirmed that the attraction will in fact open today, if you are visiting Disneyland Park, make sure to head over to Adventureland to see if you can go see some of the ancient wonders of the world on the Jungle Cruise! Disney has not said if the soft-opening will last until the official reopening on July 16.

Are you excited for the Jungle Cruise to finally be reopening at Disneyland? What do you think of the changes? Let us know in the comments!

CLICK HERE to book your adventure-filled Disney vacation today with our friends at Academy Travel!

Comments Off on Disneyland’s Jungle Cruise Has Soft-Opening!