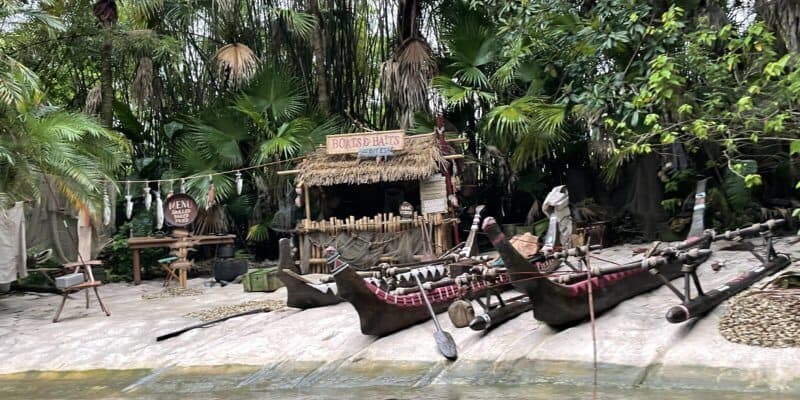 Back in January, Disney announced that its world-famous Jungle Cruise attraction, at both Disneyland Resort in California and the Walt Disney World Resort in Florida, would be receiving major overhauls. The rides would be rethemed to fit with a more modern feel that would be culturally respectful to the areas represented in the ride.

The new attraction will give the punny Jungle Cruise Skippers even more of a role — you may even spot one in the attraction itself — and will have an entirely new storyline that puts Guests right in the center of the action. In addition to the new storyline, there will be new scenes taking the place of some scenes that were thought to be culturally insensitive.

One of the attraction scenes receiving an update is what was once the Pygmy welcoming party. Guests on the Jungle Cruise would ride up to a scene of empty boats, then continue on to see dancing natives, who were actually doing a war dance. Jungle Cruise skippers would then make noises as they pretended the Jungle Cruise riders were being attacked.

Guests riding the Disney World attraction now will see that the welcoming party scene has been changed into “Boats, Baits, and Bites” where travelers to the island can rent authentic boats and sample all the delicacies island-life has to offer. Take a look at the new scene below!

As you can see, the pile of skulls, as well as the spears topped with skulls have been removed from the scene. It is not known at this time whether this scene will be added to Disneyland’s version of the attraction. The Pygmy Welcoming Party hut was specific to Walt Disney World, so Disneyland may not feel the need to add it in.

While Disneyland has kept the Jungle Cruise closed during its retheme, the Walt Disney World version has remained open. ITM’s Alessa D. was recently at the Magic Kingdom and took more photos of the construction happening. Take a look!

Retheming work at Disney World’s Jungle Cruise is expected to be completed this summer. Guests visiting Disneyland Resort will be able to board the attraction once again when the ride opens on July 16, the day before Disneyland celebrates its 66th anniversary.

Are you excited to see all the changes coming to the world-famous Jungle Cruise? Let us know in the comments!

Comments Off on PHOTOS: Disney Continues to Remove and Replace Jungle Cruise Scenes