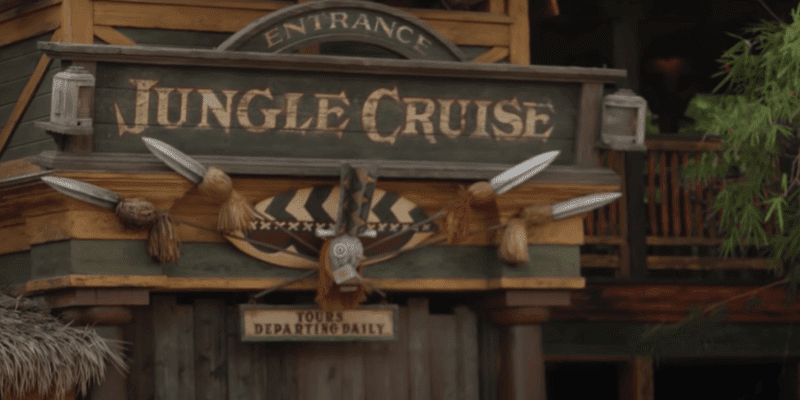 After being closed for a record 412 days, Disneyland opened its gates once again. Unfortunately, not all attractions opened with it. One of those attractions was the world-famous Jungle Cruise. The attraction was undergoing a major overhaul to remove what some thought were offensive stereotypes — including Trader Sam and the jungle welcoming party.

Well, Disney has finally announced a reopening date for the popular ride. The Jungle Cruise will once again be taking Guests on a 10,000-mile river journey on July 16!

Jungle Cruise will reopen July 16, 2021 at Disneyland park, with an updated experience that welcomes new characters from around the world plus even more of the humor, wildlife and skipper heart that makes this classic attraction a favorite. At Magic Kingdom Park, you can continue to enjoy the Jungle Cruise while updates are being made, and all changes will be completed this summer.

The new Jungle Cruise theme will focus on the journey of Alberta Falls and her world-famous Jungle Cruise. The ride will feature new scenes, but hold on to its classic comedic skippered that Disney fans have come to know and love.

Disney Parks Blog previously wrote about the new theming and gave Guests a small glimpse into who Alberta Falls is.

For those looking to dive deeper, we’re also expanding the attraction’s backstory, centered around Alberta Falls, granddaughter of world-renowned Dr. Albert Falls, as the proprietor of the Jungle Navigation Company Ltd.

Jungle Cruise fans might be familiar with her name; however, wouldn’t you know it, we recently uncovered a copy of an interview with Alberta Falls that was featured in a 1938 issue of The Daily Gnus about her and the World-Famous Jungle Cruise. We hope you’ll enjoy getting to know her!

Disney Parks also shared a video of the reimagined ride on YouTube. You can also watch the video below!

The Jungle Cruise’s opening date of July 16 is even more exciting because it signals that the attraction will be open when Disneyland celebrates its 66th anniversary on July 17, 2021.

Are you excited to once again ride the Jungle Cruise at Disneyland? Let us know in the comments!

Click here to get started booking your Disneyland vacation today with our friends at Academy Travel!