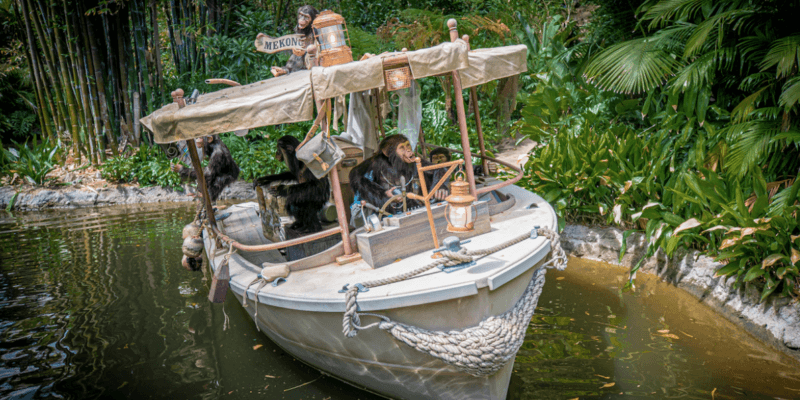 Now that we are days away from July 16, the official reopening of the “gnu”-ly reimagined Jungle Cruise at Disneyland, Disney has decided to give all Guests and Disney fans alike a look at what to expect when they finally get to hop aboard the attraction at Disneyland Park at Disneyland Resort and Magic Kingdom Park at Walt Disney World Resort.

Both Disneyland and Magic Kingdom at Disney World have been revamping their Jungle Cruise attractions to make way for a new storyline that will follow Society of Explorers and Adventurers member Alberta Falls, as Disney steers their ship away from the previous storyline, which featured culturally inappropriate show scenes.

Magic Kingdom’s version of the attraction will be completed this summer; however, the ride is still in full operation throughout the refurbishment, whereas Disneyland’s has been closed down during the reimagining. This has left many Guests awaiting the big reveal!

As you may have heard through the jungle vine, the world-famous Jungle Cruise will begin booking official tours once again on July 16 at Disneyland park. Alberta Falls, proprietor of the Jungle Navigation Company Ltd., is also preparing for explorers at Magic Kingdom Park, where this classic experience will be complete this summer. Disney Imagineers have collaborated on this bicoastal project to create new characters who come from around the world, with an expanded storyline and some fun surprises for you to discover.

The “gnu” magic includes new adventures that stay true to the experience we know and love – more humor, more wildlife and skipper heart. At Disney Parks, we continue to look for ways to enhance classic attractions and elevate the experience for all of our guests.

The “gnu” magic includes new adventures that stay true to the experience we know and love – more humor, more wildlife and skipper heart. At Disney Parks, we continue to look for ways to enhance classic attractions and elevate the experience for all of our guests.

With both attractions coast to coast receiving the same updates, the newly released photos show scenes we can likely expect to see in both theme parks. Disney also released a bird’s eye view video of the attraction on YouTube. The video was shot at Disneyland as Disney World’s rendition is still undergoing updates.

If you want to be the first to ride the new Jungle Cruise at Disneyland on July 16, D23 Gold Members have the opportunity to pay $75.00 and receive breakfast, watch an interview panel with the Imagineer team who helped reimagine the attraction, as well as ride it before park open with special gifts and memorabilia from the event. Disney also teased a soft opening for the Disneyland ride today — read more here!

Do you plan on riding Jungle Cruise as soon as it is open? What do you think of the new attraction?