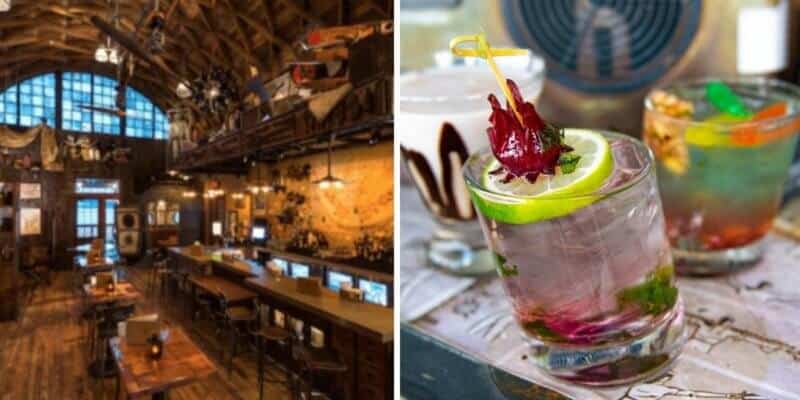 Disney’s Jungle Cruise starring Dwayne “The Rock” Johnson and Emily Blunt, will be premiering on July 30. The film has been long-awaited for many, as it was originally meant to release last year, but was postponed until theaters were once again open. Disney has been continuously hyping up the film, and now they are enticing foodies to see the movie.

At Disney Springs, if there is one location that fits the theming of Jungle Cruise, it is Jock Lindsey’s Hangar Bar. Although the bar does have a natural Indiana Jones connection, we could connect it back to Disney’s Secret Society of Explorers and Adventurers, a secret club that Jock Lindsey is a part of, which also heavily connects with the Jungle Cruise attraction!

Even if the bar is not meant to be a Jungle Cruise bar like Trader Sam’s, it does fit the exploration theme very well. Now, Guests visiting Jock Lindsey’s Hangar Bar can enjoy limited-time Jungle Cruise offerings! The Disney Springs (@DisneySprings) Twitter account announced the new food and drink additions, which will only be around until August 30.

You can take a look at the full menu, including all the temporarily new additions on the Walt Disney World website, here.

If you want to learn the backstory and detailing of Jock Lindsey’s Hangar Bar, take a read at the official story below:

Refuel for Your Next Adventure
In search of dining, drinks and décor far beyond the ordinary? Touch down at Jock Lindsey’s Hangar Bar.

This family-friendly waterfront outpost is a prime destination for explorers seeking casual fare with a daring flair and rare cocktail concoctions—surrounded by vintage aviation ambience inspired by the high-flying exploits of Indiana Jones’ intrepid pilot.

Set off on a thrilling culinary expedition with our Snakebite Sliders served with tomato-bacon jam. Share a taste of the action with your whole flight crew by splitting an order of Air Pirate’s Pretzels or seasonal flatbreads.

Enjoy beer flights, wine or discover our “spirits” of adventure: exotic, one-of-a-kind elixirs to complement your gourmet journey. Try the Fountain of Youth or The Scottish Professor, a snappy blend of Scotch whiskey and gin. Non-alcoholic drinks are also available. So, what’s your pleasure, kid?

The two globetrotters stumbled on Disney Springs in 1938 while chasing down a mythology-based tip in central Florida. Attracted to the town’s natural springs and lush terrain, Jock bought some waterfront property and eventually settled down, piloting seaplane tours across the fast-growing Sunshine State.

Jock eventually built an airplane hangar, air tower and runway, and invited fellow members of The Society of Explorers and Adventurers to pay him a visit. His home base soon became a popular stopover and watering hole for world travelers and locals alike.

Today, thrill-seeking families cross borders and continents to soak up the rugged charm of this artifact-strewn hangar bar, with its spare airplane parts, salvaged equipment and dusty mementos of glory days gone by.

Would you like to try the new Jungle Cruise offerings at Jock Lindsey’s Hangar Bar? Let us know in the comments below!