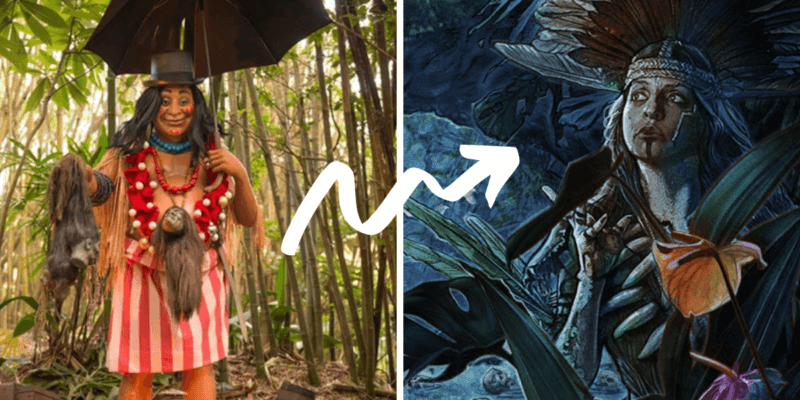 The all-new Jungle Cruise film — based on the classic Disney Parks attraction of the same name — includes several Easter eggs from the ride. But someone you absolutely cannot miss is Trader Sam.

Yes, that’s right. Trader Sam, a character Disney fans know well from the Jungle Cruise attraction at Disneyland and Walt Disney World, is also a character in the new movie. Only there is something very different about this Trader Sam — she is a woman, she is a leader, and she is not the “head salesman” from the theme parks.

Here’s what you need to know about the Trader Sam Jungle Cruise icon and how the character has changed with the debut of the film.

To give you some background information, Trader Sam is a longtime Disney Parks icon. There are even bars named after him!

For decades, Trader Sam was regarded as the “head salesman” — or, more distinctly implied, the actual head salesman — of the jungle. The person was depicted as a native man who sold shrunken heads and was often the subject of some of the last jokes Guests would hear before disembarking their boat.

Though Sam was a popular character that many Guests grew to recognize on the Jungle Cruise attraction, he was removed as part of Disney’s efforts to eliminate insensitive depictions of other cultures within the theme parks. However, Jungle Cruise skippers still refer to Trader Sam on the ride — just not in a way that is offensive. Now, at the end of the boat ride attraction, instead of seeing the Trader Sam animatronic, Guests will see Trader Sam’s gift shop, as Sam is off on an adventure scouring the jungle in search of more goodies to sell.

In the past, the attraction depicted Trader Sam as an animatronic without any audio, and the character did not have a speaking role. In the new film, Trader Sam is a woman with agency.

She is a cunning leader with intelligence, wit, and drive, and her inclusion in the film feels quite intentional. I don’t aim to spoil the movie, but I will say that Sam plays an integral role in moving the story along, and her knowledge is quite important to the other characters’ fate.

So, is Disney reinventing Trader Sam, changing who the character was before? Or were there other “Trader Sams” before this? Perhaps. Some may argue that the Trader Sam we knew from the attraction is different from the one introduced in the film — maybe even a Trader Sam who came before her.

But personally, I think Disney has effectively redefined Trader Sam and reshaped this character into an all-new person, giving viewers of the movie a clearer idea of who Disney Parks refer to when they mention Trader Sam while giving tours on the Jungle Cruise riverboat ride.

(Want to see Trader Sam in live-action? You’ll have to watch the movie — we’re not showing any screenshots!)

As part of Disney’s efforts to emphasize diverse storytelling and eliminate insensitive depictions of other cultures, the company has made some significant changes to the Jungle Cruise Attraction. One of these changes included the removal of the Trader Sam animatronic from the ride at Disneyland Park at Disneyland Resort and Magic Kingdom at Walt Disney World Resort.

Disney has redefined who Trader Sam is, creating a fleshed-out character with personality and wit. Walt Disney once said, “We keep moving forward.” And now, it appears Disney used Trader Sam in the Jungle Cruise film to do just that.

As the long legacy of the Jungle Cruise will continue in the Disney Parks — and now the new film — who know how many new characters we will see in the future. For now, we can see Sam in the new movie and know that the character lives on in one way or another on the classic Disney ride.

Are you excited to meet Trader Sam in the new Jungle Cruise film, in theaters and Disney+ Premier Access on July 30?