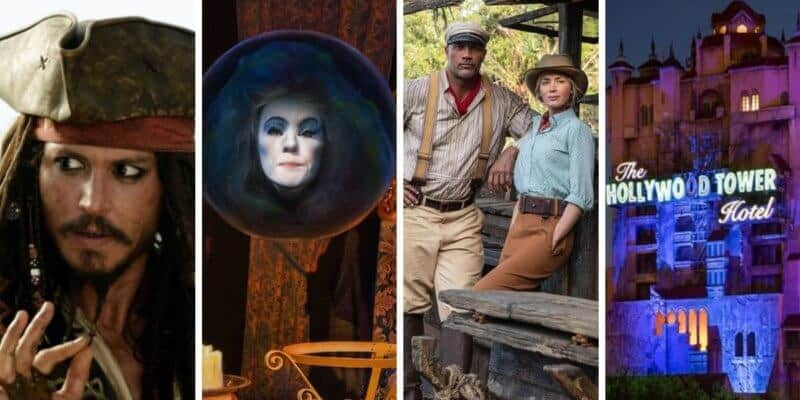 Jungle Cruise is the latest film released by Disney to be based on a popular Disney Parks attraction.

The film, which stars Dwayne “The Rock” Johnson and Emily Blunt, takes viewers on an adventure down the Amazon. Along the way, you will hear various “Dad jokes” from Johnson, who plays Skipper Frank Wolf. These jokes are also something riders will experience if they hop aboard the classic Disney Parks attraction of the same name — Jungle Cruise.

Jungle Cruise brought in an estimated $61.8 million at the worldwide box office, according to CNN. With the recent success of Jungle Cruise, as well as the continued blockbuster success of the Pirates of the Caribbean films, what other Disney Parks attractions will Disney turn into films?

Well, at the time of publication, there are four different movies in the works! Here is everything we know so far regarding the films in development.

The Haunted Mansion is a popular attraction located in both the Magic Kingdom at Walt Disney World and inside Disneyland Park at Disneyland Resort. The popular dark theme park ride takes Guests through a mansion of haunted characters while riding aboard a Doom Buggy.

In 2003, Disney brought us a live-action film based on the popular and classic Disney Parks attraction — the Haunted Mansion. This film, which starred Eddie Murphy, Marsha Thomason, Terence Stamp, Nathaniel Parker, and others, wasn’t widely received.

Now, however, we know that Disney has decided to work on yet another live-action film based on this Disney Parks attraction.

We already know, thanks to The Hollywood Reporter, that Katie Dippold is set to write a feature based on the classic Haunted Mansion attraction at Disney Parks (the original of which is located at Disneyland). Given that the director is well-versed in comedy, perhaps the new movie is intended to be a comedy (or at least a funnier film than the original), but nothing seems to be set in stone.

For more information on the upcoming Haunted Mansion-based film, visit our website here.

The Matterhorn Bobsleds roller coaster opened on June 14, 1959 at Disneyland Resort in Anaheim, California. And for those who are fans of this classic attraction, you may soon experience it as a film as, according to DisInsider, Walt Disney Studios is reportedly working on a film inspired by the Matterhorn Bobsleds ride.

All we know so far is that this project has been in early development for over a decade, but we now know that the feature film is being developed for Disney+.

You can read more about this project here.

The third film we know that Disney is developing is based on the iconic Space Mountain attraction found at Disney Parks.

What we know so far is that for this Space Mountain film project, Disney hired Joby Harold, who is currently writing and executive producing the new Disney+ Obi-Wan Kenobi Star Wars series. In regards to production, Rideback has been tapped for the project, which is run by Dan Lin and Jonathan Eirich (the same duo who is working on the live-action Haunted Mansion and known for Disney’s live-action Aladdin).

For more information on the upcoming Space Mountain film, visit our website here.

And this last film is sure to make all of you The Twilight Zone Tower of Terror fans excited! Disney is reportedly creating a brand-new film about the iconic attraction, with Scarlett Johansson involved as both an actor and producer!

This film has been discussed a few times prior to Johansson’s reported involvement. In 2015, rumblings of a Tower of Terror film being in the works began as the film plot was said to revolve around five people inside an elevator at the Hollywood Tower Hotel. At this time, we are unsure if the Johansson film will follow the same storyline, but Inside the Magic will update you as we get information.

What other Disney Parks attractions would you like to see turned into films? Let us know in the comments below.