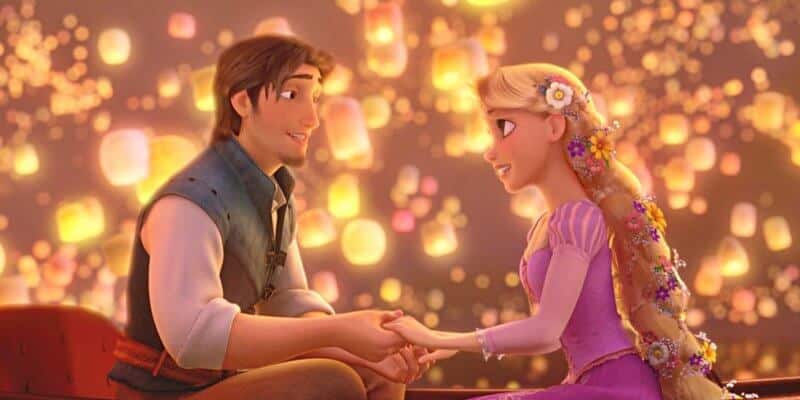 Tangled (2010) is one of Disney’s most popular — and successful — movies of the 2000s. The story of Rapunzel (Mandy Moore) and Flynn Rider (Zachary Levi) captured the hearts of Walt Disney Animation Studios fans and “Punzie” became one of the most recognizable Disney Princesses of all time.

As it turns out, though, the Tangled we know and love almost, well, wasn’t. The movie was originally set to be a live-action story that was, in many ways, the reverse of Disney’s Enchanted (2007).

Enchanted stars Amy Adams as Giselle, a Princess from the fictional land of Andalasia, who is transported to modern-day New York City. While there, she meets lawyer Robert Philip (Patrick Dempsey), who ultimately steals her heart.

Related: Idina Menzel Will Have Solo Number in ‘Disenchanted’

Tangled, however, was originally supposed to showcase Rapunzel as a woman from California who gets magically transported to a fairytale realm. Buzzfeed summarized:

Tangled almost featured Rapunzel living in modern-day San Francisco and then getting transported to a fairy tale world — think the reverse of Enchanted.

The Disney Fandom Wiki has shared additional details about the Glen Keane-directed project, which was originally set to be titled Rapunzel Unbraided:

An evil witch named Lucretia despised fairy tale happy endings and plotted to change all that. Meanwhile in modern day San Francisco, Claire and Vince are two vastly opposite teenagers who cannot stand one another. Claire is a short haired, fashion obsessed teen who was concerned with her looks. Vince is a stocky and crude pizza delivery boy on hard times. The two of them get on each other’s nerves which gets the attention of Lucretia in the fairy tale realm. Lucretia takes Rapunzel and her prince Beau and transforms them into a squirrel and dog, respectively, while Claire and Vince find themselves filling their roles. Claire and Vince eventually team up with Rapunzel and Beau to defeat Lucretia and return to their respective places in time.

Mother Gothel would have still been in the film, but with a significantly more subtle role.

Now, it’s difficult to even imagine this version of Tangled, but it almost came to fruition before the studio drastically overhauled the movie and the Tangled we know and love today — lanterns, the Snuggly Duckling, and all! — was born.

You can currently stream Tangled on Disney+ anytime. The official description reads:

When the kingdom’s most wanted — and most charming — bandit, Flynn Rider (Zachary Levi), hides out in a mysterious tower, he’s taken hostage by Rapunzel (Mandy Moore), a beautiful and feisty tower-bound teen with 70 feet of magical, golden hair. Flynn’s curious captor, who’s looking for her ticket out of the tower where she’s been locked away for years, strikes a deal with the handsome thief, and the unlikely duo set off on an action-packed escapade, complete with a super-cop horse Maximus, overprotective chameleon Pascal and a gruff gang of pub thugs.

Rumors of an actual live-action adaptation of Tangled — Tom Holland’s name was even attached at one point! — have run rampant in recent years, but nothing has been officially announced by Disney.

Furthermore, Disney Parks fans have a lot to look forward to when it comes to Tangled, as Rapunzel’s kingdom of Corona will be included in the upcoming Fantasy Springs port at Tokyo Disney Resort.

What do you think about the fact that Tangled was originally supposed to be a live-action Disney film?

Comments Off on ‘Tangled’ Was Almost a Live-Action ‘Enchanted’ Reversal