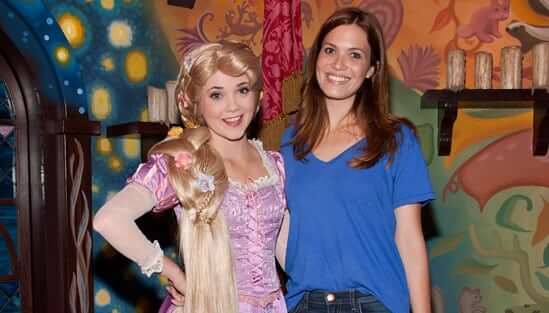 Singer, actress, and self-described “Disney nerd” Mandy Moore— who starred as the voice of Rapunzel in Disney’s animated feature “Tangled,” thought of the perfect place to spend her 33rd birthday this week: at the exclusive Club 33 restaurant in Disneyland‘s New Orleans Square.

Moore, who is perhaps best known for her live-action performance in the 2002 romance “A Walk to Remember,” celebrated with friends (including folk-rocker Taylor Goldsmith of the band Dawes) who all wore matching “”MM 33” custom t-shirts complete with Mickey ears.

Moore commented on the photo in her Instagram post, “What a way to celebrate 33 than at Club 33? And thank you sweet Chip for escorting us through every ride, corn dog and churro. I am forever a Disney nerd.”

Mandy Moore currently stars as Rebecca Pearson on NBC’s acclaimed drama series “This is Us,” and has reprised her role as Rapunzel in “Tangled: The Series” on Disney Channel.