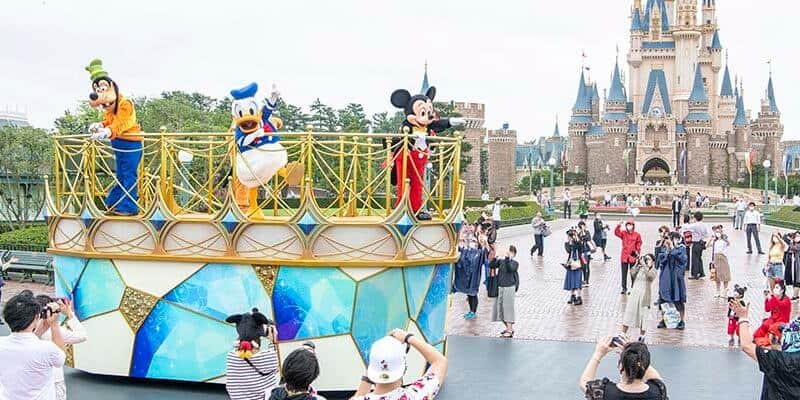 Tokyo Disney Resort has added multiple new character greetings to their official website. These new offerings are all social distanced so you will not be able to run up and hug your favorite characters just yet, but you will be able to enjoy seeing them out in the park.

Earlier this week we covered that Nightfall Glow, which is traditionally the smaller nighttime parade used for rainy weather, will be resuming operations. A fireworks spectacular will also be resuming between both parks called, Disney Light the Night.

In addition to the Nightfall Glow, and Disney Light the Night, both which are scheduled to debut today, Tokyo Disney Resort posted two addition special character greetings for both Tokyo Disneyland and Tokyo DisneySea.

Tokyo Disneyland’s Mickey & Friends Castle Greeting will be from 9:05am-4:30pm with four performances, and only last 3 minutes. Mickey & Friends Greeting Parade will take place at 10:00am and 3:15pm lasting only three minutes.

Getting Back To Normal

These small character greetings being added on top of the new nighttime fireworks and parade and a great sign that Tokyo Disney Resort is having success with the reopening of their park after the unprecedented closure due to the pandemic. While the “Disney Character Greeting” section of the official Tokyo Disneyland website remains blank, guest will surely enjoy these new shows that allow them to see their favorite characters.

Are you excited to see characters return to Tokyo Disney? Let us know in the comments below.