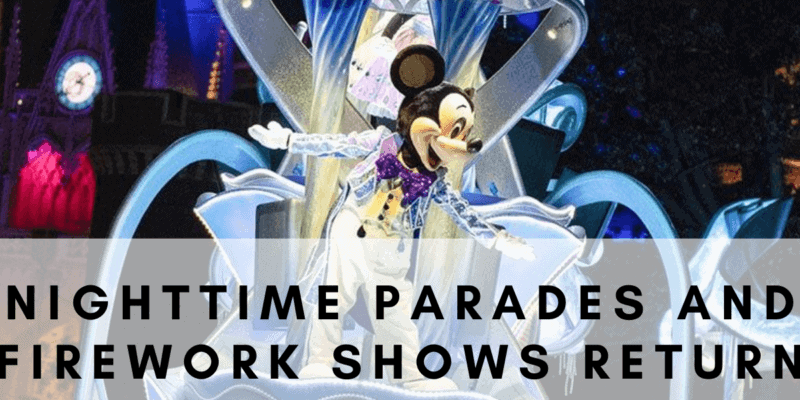 Tokyo Disney Resort has taken a step towards business as usual as two attractions are set to resume at the parks. Nighttime parades at Tokyo Disney are back with the return of Nightfall Glow. Meanwhile, the parks’ nightly firework shows will also return in the form of Disney Light the Night.

The return of nighttime shows to Tokyo Disneyland is a good sign for any Disney fan who misses these iconic shows and it bodes well for how the US Disney parks might start returning to normal. If you’re desperate to see a nighttime spectacular, check out this amazing recording of Magic Kingdom’s Happily Ever After show!

Nightfall Glow is the first nighttime parade to resume

Tokyo Disneyland’s website has now added a schedule for each of the attractions. Both the Nightfall Glow parade and Disney Light the Night fireworks show will resume from tomorrow (September 1st).

Nightfall Glow is scheduled to be shown every night in September at 6:45pm. Here’s Tokyo Disney’s official statement:

‘The fantastic glow of lights and colors light up the Park at night.

Mickey Mouse, Minnie Mouse, and their Disney friends appear in this shimmering interlude of lights aboard floats that glow in a changing rainbow of colors. The parade starts in Toontown, proceeds around the Plaza and through Westernland, and exits through Fantasyland.

“Nightfall Glow” is originally a mini parade presented only on rainy days, but it will be specially presented at this time until further notice’.

Nightfall Glow is a much smaller parade than some others usually on offer at Tokyo Disneyland. It’s thought that this parade may be a trial of sorts ahead of reintroducing much larger parades with more floats.

This marks the first Disney nighttime parade to resume operations since COVID-19 temporarily closed all resorts.

Disney Light the Night is Tokyo’s nighttime extravaganza, complete with beautiful fireworks. The show is played at both Tokyo Disneyland and DisneySea theme parks and will play at both of these parks come September 1st.

The website has updated to include showing times for every day in September. The show will play at 8:00pm.

It’s amazing to see Tokyo Disney Resort get back on its feet. Nighttime parades and firework shows are an essential part of the Disney park experience and a big part of where the magic happens for a lot of guests.

What do you think of the return of nighttime parades at Tokyo Disney Resort? Let us know in the comments below.

Comments Off on Nighttime Parades at Tokyo Disney Resort to Resume