Last year, the COVID-19 pandemic rocked the world. Nearly all industries were impacted by the global lockdown that occurred to stem the spread of the novel coronavirus, but retail shops like comic book stores faced a bigger uphill challenge than most.

In a world that is increasingly turning to online media, comic shops rely heavily on in-person events and local community gatherings that simply couldn’t happen last year. That’s where one Mandalorian actor, Dominic Pace, stepped in to save the day.

Pace played the surprising fan-favorite character, bounty hunter Gekko, in two episodes of The Mandalorian Season 1, “Chapter 1: The Mandalorian” and “Chapter 3: The Sin”.

Recently, the actor spoke to Rebel Force Radio about his comic book tour last year to raise money for struggling small businesses — and how he plans to continue this new tradition again in 2021.

“I didn’t expect the success for the tour [the 2020 tour] to have as it ended up playing out. Um, I was able to raise over $25,000 for small business, combined with working alongside the amazing charitable organizations of the 501st Legion, The Mandalorian Mercs, as well as the Rebel Legion, and we raised close to $5,000 for charity.

I thought it was a beautiful message that was sort of parallel to so many of Disney’s teachings, so many of Dave’s [Mandalorian executive producer Dave Filoni] teachings. We have these beautiful proverbs before The Clone Wars [animated series Star Wars: The Clone Wars] and Rebels [animated series Star Wars Rebels] in regards to believing in yourself and sometimes with even the smallest package, amazing things can happen.”

Pace went on to share details about his comic shop tour last year, and the incredible success he felt he had, not only as an actor within the Star Wars franchise, but as a true Star Wars fan himself — and as someone who, like many Mandalorian viewers, is rooting for more screentime for Gekko in the future.

“I visited over 50 different comic book stores — and the one thing, also, was feeling the positivity and the energy of Star Wars. It wasn’t necessarily people there for Gekko, but it was people just coming together for something — one common denominator that we can all agree upon. And, that’s the beautiful positivity of Star Wars, which has inspired so many, including my heart, in a million different ways over the last 45 years in my life.

I’ve just been so grateful for the opportunity…what ended up happening was, it was infectious. The connection that I had with the fan base — I just extended myself in so many different ways to the charitable organizations. Also, being a lifelong Star Wars fan and believing in this bounty hunter, wanted to see this bounty hunter prosper throughout the series, whether it’s live-action, animation, or through the video games or merchandise, uh, I was so incredibly passionate.”

Related: New ‘Star Wars’ Series Will Be Much Longer Than Expected

Pace also told Rebel Force Radio that there had, at one point, been plans for Gekko to appear in an issue of the Marvel Star Wars “War of the Bounty Hunters” comic series, alongside the likes of Boba Fett, Han Solo, Bossk, and more.

Although this ended up not working out due to Lucasfilm’s plans for various Mandalorian characters, fans “around the world” came together to create a fan-fiction comic about Gekko, proving that Mandalorian fans definitely want to see more of this Jon Favreau and Dave Filoni character moving forward.

You can view Dominic Pace’s full 2021 comic book tour schedule below. It is not clear at this time where the proceeds from this year’s tour will be going. 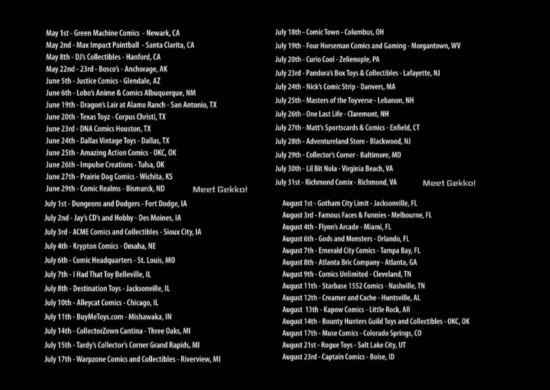 What’s next for The Mandalorian saga?

Whether or not we end up seeing Gekko again in The Mandalorian or one of its spinoff series, remember you can catch Temuera Morrison’s Boba Fett and Ming-Na Wen’s Fennec Shand in The Book of Boba Fett this December.

Additionally, both The Mandalorian Season 3 and Ahsoka are expected to debut on the Disney+ streaming platform in 2022. Pedro Pascal has been confirmed to reprise his role as Din Djarin in the third season of The Mandalorian, with both Katee Sackhoff (Bo-Katan Kryze) and Giancarlo Esposito (Moff Gideon) also expected to be back.

Ahsoka will once again star Rosario Dawson as the live-action version of Ahsoka Tano.

As for The Mandalorian’s third spinoff show, Rangers of the New Republic, it is “no longer in active development” following actress Gina Carano’s firing from the Star Wars franchise. Her character, Marshal Cara Dune, was expected to lead the series.

Are you going to try to attend one of Dominic Pace’s appearances this year?