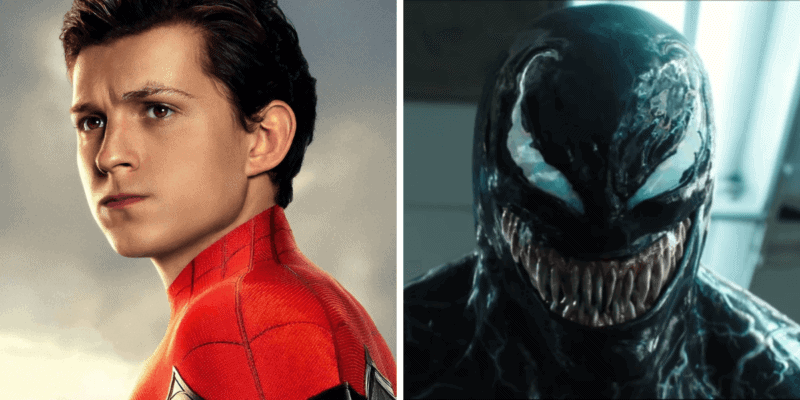 A Spider-Man vs Venom movie could see the Venom universe collide with the MCU, according to a recent rumor. A new report claims to have insider knowledge from a source at Sony following the new deal that will see Sony Spider-Man movies — and other films — come to Disney+.

Allegedly, a movie that will see Tom Hardy‘s Eddie Brock and Tom Holland’s Peter Parker come to blows is in development, though this has not been confirmed by any studio executives at this time.

What does the report say about the alleged movie?

The article reiterates what we all know — that a crossover between the MCU and the Sony Pictures Universe of Marvel Characters has been impossible to date. Sony owns the rights to Spider-Man, but has a deal with Disney to allow him into the MCU for two more movies.

One of those films is Spider-Man: No Way Home (2021). The other is currently a mystery.

However, Tom Holland has been rumored to appear in Doctor Strange in the Multiverse of Madness (2022). No Way Home is heavily rumored to feature the multiverse as a key plot point, explaining the return of Alfred Molena as Doc Ock and Jamie Foxx as Electro. It may also see the Sam Raimi and Marc Webb Spider-Man characters, played by Tobey Maguire and Andrew Garfield, respectively. If all this is true, it could be possible that Holland may appear in Doctor Strange 2.

It is important to remember, however, that nothing has been confirmed at this time.

However, ScreenRant noted that the new deal may give Sony more rights to Spider-Man himself. As Marvel President Kevin Feige said when commenting on the deal:

“[Spider-Man] also happens to be the only hero with the superpower to cross cinematic universes […] So as Sony continues to develop their own Spidey-verse you never know what surprises the future might hold.”

Spider-Man vs Venom is a Marvel fan’s dream

Venom is arguably Spidey’s biggest rival in the comics, with the exception of the Green Goblin. Fans may be slightly nervous about seeing Peter Parker in the Venom films — the first one wasn’t exactly critically acclaimed. However, it performed very well financially. A Spider-Man vs Venom movie is almost a guaranteed blockbuster hit and both Disney and Sony know it.

If Sony does have the rights to Tom Holland’s Spider-Man character, it makes sense that it would want to include him in a hypothetical Venom 3.

Additionally, the introduction of the Venom symbiote and Peter might forever change his character. Fans of Spider-Man 3 (2007) will remember how the symbiote warped Peter’s mind and turned him more ruthless than we’ve ever seen him. Imagine a black-suited Spider-Man interacting with The Avengers.

Every Marvel comic fan wants to see this iconic storyline come to the big screen.

However, time will tell whether this report is true. Until then, Spider-Man vs Venom is pure fan fiction.

Could Spider-Man appear in Venom 2?

The timing does seem right for Spider-Man to at least cameo in Venom: Let There be Carnage. As reported by Digital Spy, Venom sequel director Andy Serkis had this to say on the inclusion of The Daily Bugle in the first trailer:

“Obviously there are links between Venom and Spider-Man and the Marvel universe and the Spider-Man story but we’re treating this very much as it’s his own world,” Serkis explained.

“Venom’s story is his own world, there are nods and little moments just like this newspaper The Daily Bugle of course. But on the whole, he’s unaware, they are unaware at this point of other characters like Spider-Man.

“So that’s the way we’ve chosen to play this particular episode of the movie but well we’ll wait and see what little things you can pick out of it.”

Very interesting. Serkis seems to imply that Spider-Man may actually be swinging around in the Venom universe already, suggesting once more than Venom actually is part of the MCU. This was previously reinforced by the appearance of Michael Keaton as The Vulture in a Morbius trailer; a film that is also part of Sony’s Marvel universe, starring Jared Leto.

However, if the universes are to remain separate, No Way Home’s focus on the multiverse could create an easy way for Spider-Man to hop universes and interact with Tom Hardy’s Venom and Woody Harrelson’s Carnage. Perhaps then, the end of Venom 2 or No Way Home could lead directly into a Spider-Man vs Venom movie.

Comments Off on Spider-Man vs. Venom Movie Reportedly In the Works