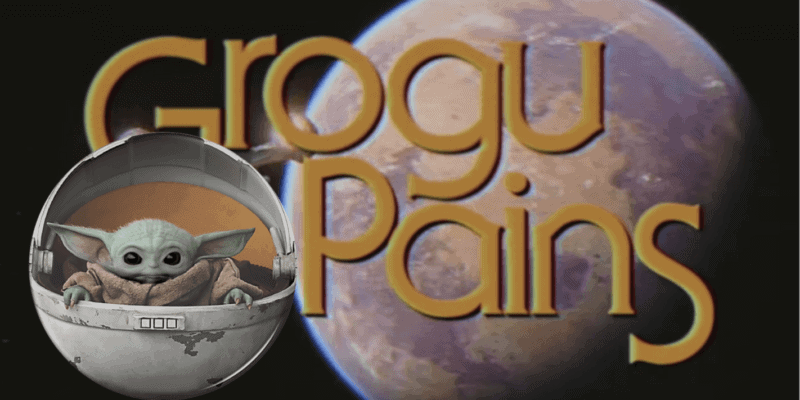 If you grew up in the 1990s, you’re going to want to see this hilarious video featuring none other than the Mandalorian (Din Djarin, played by Pedro Pascal) and Grogu (AKA The Child AKA Baby Yoda).

Nerdist has reimagined The Mandalorian as a Growing Pains-inspired ’90s sitcom called — wait for it — Grogu Pains.

Everything you loved about Season 2 of Jon Favreau and Dave Filoni’s hit series, The Mandalorian — which concluded with an epic season finale episode (“Chapter 16: The Rescue”) featuring Luke Skywalker (CGI Mark Hamill) on December 18 — is back in this uproariously funny reimagining.

It even showcases all of the iconic Star Wars guest stars who were featured in the second season of the popular show, including Star Wars: The Clone Wars character Bo-Katan Kryze (Katee Sackhoff), who is likely to continue playing a major Mandalorian role moving forward since her Darksaber story arc was left unresolved. (Djarin, not Kryze, became the de facto ruler of Mandalore after winning the black-bladed weapon in a beskar spear vs. Darksaber battle with Moff Gideon (Giancarlo Esposito), who is also featured in this Mandalorian parody title sequence.)

Perhaps the funniest moment of the title sequence comes, however, when “Robert Fett” is introduced — beskar armor-clad bounty hunter Boba Fett (Temuera Morrison) made his triumphant return to Star Wars in The Mandalorian Season 2, Episode 6 (“Chapter 14: The Tragedy) after somehow escaping the Sarlacc pit he was thrown into in Star Wars: Episode VI – The Return of the Jedi (1983).

Finally, the stars of the show are featured — with Djarin looking intense in his Mandalorian armor and jetpack and Grogu billed as “Grogury St. John.”

Related: Supercut Features EVERY Cute Grogu Noise From ‘The Mandalorian’!

The Nerdist team managed to compile a collection of moments that truly embody the best of Growing Pains — which ran from 1985 to 1992 and starred Alan Thicke, Joanna Kerns, Kirk Cameron, Jeremy Miller, and Tracey Gold, and Ashley Johnson as the Seaver family.

The long-running series was also a launching pad for young talent, featuring the likes of Leonardo DiCaprio at one point.

Next up for The Mandalorian gang? Season 3 — which currently has no official release date and doesn’t appear on Disney’s 2021 release schedule at this time. This means fans may have to wait until 2022 for new episodes of the Emmy-winning Mandalorian series.

The storyline for The Mandalorian Season 3 hasn’t been shared, but some rumors indicate the new season will return to Star Wars fan-favorite prequel trilogy planet, Naboo.

Showrunner Jon Favreau has, however, confirmed that The Book of Boba Fett — one of The Mandalorian’s three upcoming spinoff series — will debut in December 2021. The other two spinoff shows, Ahsoka (featuring Rosario Dawson as Star Wars: The Clone Wars and Star Wars Rebels character Ahsoka Tano) and Rangers of the New Republic (possibly featuring Gina Carano as Cara Dune), are expected to debut alongside the third season of The Mandalorian.

What do you think about this hilarious Star Wars ’90s sitcom parody? Are you excited to see the Star Wars universe continue to expand via new Mandalorian shows — what are you expecting in the upcoming season?

Comments Off on Hilarious Video Turns ‘Mandalorian’ Into 1990s Sitcom