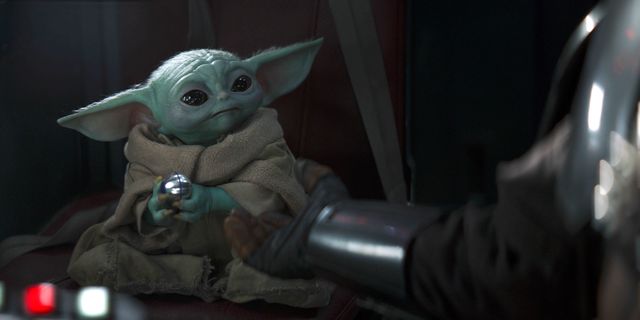 Grogu (AKA The Child AKA Baby Yoda) tugged on America’s heartstrings from the moment he first appeared in The Mandalorian Season 1, Episode 1 (Chapter 1: The Mandalorian) on November 12, 2019.

Adding to the cuteness is a brand new supercut video that features all of Grogu’s most adorable noises from The Mandalorian in one convenient location — perfect for fans who want all “Baby Yoda” all the time!

As CBR notes about the Grogu noises compilation:

The supercut video features multiple instances of Grogu being cute while cooing in response to events that befall him and Din Djarin. The moments vary in tone from the silly (i.e. waving his hands in the air on the Razor Crest) to the scary (i.e. having a space-spider on his head) to downright emotional like running into Din’s arms after being held hostage in the desert. There are also a handful of scenes that reflect his deep love of food, including blue space macarons, spits of roasting meat and, rather controversially, Frog Lady’s eggs.

Grogu has truly become the gift that keeps on giving for Star Wars fans!

Where will Grogu appear next?

At this time, details about the third season of The Mandalorian are murky. No official release date has been confirmed and the show — alongside two of its spinoffs, Ahsoka and Rangers of the New Republic — were not listed on Disney’s 2021 release schedule, which was unveiled late last week.

Mandalorian creator and showrunner Jon Favreau has confirmed that The Book of Boba Fett will premiere in December 2021 — this, presumably, is the “next chapter” of The Mandalorian saga that Lucasfilm President Kathleen Kennedy mentioned during Disney’s 2020 Investor Day event on December 10.

There are numerous theories about what could happen next with Star Wars’ most popular character of the moment. Some think he may leave the Jedi to return to Din Djarin — his father figure — while others believe Grogu will be absent from The Mandalorian Season 3, and would instead appear in the rumored Luke Skywalker spinoff, which could potentially feature Sebastian Stan playing the iconic Jedi Master.

Yet another fan theory is that Grogu will next show-up in Ahsoka, which is set to feature Rosario Dawson reprising her role as the Star Wars: The Clone Wars and Star Wars Rebels fan-favorite.

Neither Lucasfilm nor Disney have confirmed anything about where Mandalorian fans will get to see Grogu next. We do know, however, that The Mandalorian is quickly becoming the center of the Star Wars universe on the Disney+ streaming platform, so there’s no doubt the infant Force user will continue playing a major role in a galaxy far, far away moving forward.

Related: ‘The Mandalorian’; Is ‘So Much Bigger Than All of Us’

When we last saw our tiny Jedi hero in The Mandalorian Season 2 finale, he had been rescued from Moff Gideon’s (Giancarlo Esposito) Imperial remnant by Djarin, Cara Dune (Gina Carano), Fennec Shand (Ming-Na Wen), B0-Katan Kryze (Katee Sackhoff), and Kosha Reeves (Sasha Banks) — who had more than a little help from Luke Skywalker (CGI Mark Hamill, in this case).

What do you think? Where will Grogu appear next?