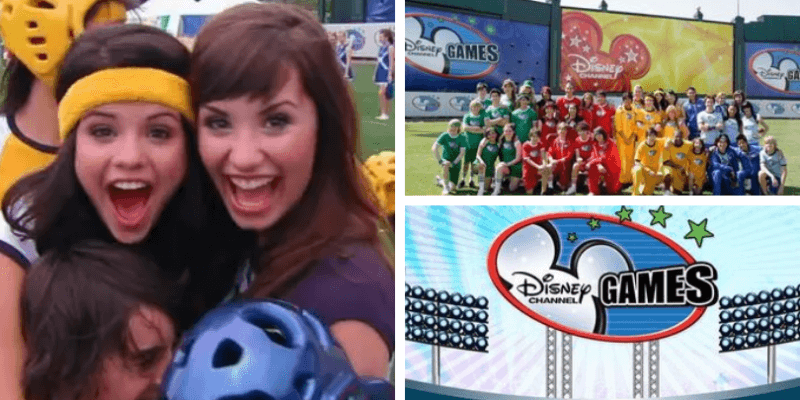 As Disney talks of revivals of classic movies and shows like Lizzie McGuire and Hocus Pocus, I can’t help but hope they will revive one of my personal favorites: The Disney Channel Games.

Disney+ gives Disney fans, old and new, a way to relive their favorite era of Disney magic or discover new magic from other eras. One of the best things that Disney aired during my teenage years was the Disney Channel Games, as they are tied together with everyone’s favorite Disney Channel icons. But, why and how would these games make a return to our TV screens? I’ve got some ideas.

What Were the Disney Channel Games?

The first year had three teams of Disney Channel stars, while the two following years had four teams, which were the red, blue, green, and yellow teams. Each team was championed by a Disney Channel favorite, as all teams competed for the title of Disney Channel Champions. Celebrities from different Disney Channel Original Movies (DCOMs) and their television shows competed, including stars such as Brenda Song, the Sprouse twins, Demi Lovato, Miley Cyrus, the Jonas Brothers, and so many more. There were even stars from other Disney Channel TV shows around the world, such as Shin Koyamada of Wendy Wu: Homecoming Warrior. Just like Shin, these stars added some punch to the American line-up.

This game show was the pinnacle of competition on Disney Channel, putting our favorite stars against one another in a battle royale of obstacle courses, messy games – even a rock-paper-scissors showdown. We received a brief revival with the Friends for Change Games in 2011, but I think now is a perfect time to bring back this classic event from Disney Channel’s “So Hot Summer” era.

I think everyone craves an aspect of their childhood or just the best times of their past every so often. The Disney Channel Games (DC Games) satisfies that need for nostalgia.

The DC Games unites nostalgic icons all under one roof – or in one giant stadium. Plus, this show had a major cool factor. Flashback to yesteryear with me. Imagine: The cast of High School Musical goes head-to-head with the cast of Hannah Montana in a battle to the death – nope, a battle to the finish line – in an inflatable obstacle course.

Nick Jonas and Jason Earles team up to take down their co-stars (and in Nick’s case, his siblings) in a tug of war contest that stretched players to their limits. Brenda Song and Ashley Tisdale got to have a real-life rivalry to pair with their on-screen competitive shenanigans as they both lead teams as captains in the first competition. But, unfortunately for Tisdale, Song’s team got the last “Yay Me!” and the Disney Channel Games trophy.

Feeling comfortably nostalgic? Wishing you could relive (or see for the first time) this competition? Disney does not currently have this show in their library of nostalgic content on Disney+, but they should!

This event let kids see their heroes on the screen, working together toward a common goal – or dunking on one another in a basketball contest. This is something we could all enjoy again. But, more than that, this competition is a show that needs a revival. It is a gift that could keep giving for years to come. What could revive the show? So while we’re all in this together, let’s get our heads in the game to imagine how this could be the start of something new.

Visit with Old Stars and Introduce New Ones

If Disney gave fans a Disney Channel Games revival, they could promote old icons while introducing new favorites. As fans of the original Disney Channel Stars Era are now becoming older, they will have children they will want to introduce to their favorite stars. If Disney brings back these games, they could have old stars come back to compete, host, and perform while the new stars battle it out like Alex, Max, and Justin in their Family Wizarding Competition.

Just think! Selena Gomez could perform on stage at the close of an intense round of messy games between Jason Dolley and Anneliese van der Pol. Zac Efron would make a dynamic host, especially if he co-hosted with Disney Channel darling Brenda Song. As these favorites compete, they could team up with stars from eras after these games, like Dove Cameron and Jenna Ortega. They could also introduce new stars from new children’s shows for years to come and compete in the name of team charities, as they used to. But, could anyone other than Harley Diaz invent a way for this show to return?

Disney+ — This streaming service is why the timing of this revival series could not be better. Kids are growing up with classics such as old Disney Channel and even watching new shows, such as Diary of a Future President. Audiences old and young would recognize old and new stars from the streaming platform. Bringing these diverse fan favorites back in a Disney Channel Games Revival would cement the star power of past and present stars as they come to the screen in a fresh way, uniting together the best of both worlds.

This revived game show could air each episode weekly on Disney+, like the hit show The Mandalorian. After all, “This is the way.” If the show airs weekly, filming would be flexible for Disney to make a new team each week if needed or stay with the same teams throughout one season, but film all segments in a limited time shooting process.

This remake would be a fun way to promote new shows from Disney+ and old favorites from the Disney Channel of days past. You don’t have to be a girl of the 21st century or Phil of the Future get excited for the prospect of uniting stars of the past, present, and future.

This Disney Channel Games revival hits right in the nostalgia. It would be a way to reunite our favorite Disney Channel stars as well as introduce audiences to new favorites. Disney+ provides opportunities to relive old favorites while giving a platform to revive those classics.

I say, let’s do this and have a Disney Channel Games revival!

Do you think Disney should bring back the Disney Channel Games? Let us know in the comments!

Editor’s Note – The opinions reflected in this article do not necessarily reflect those of Inside the Magic overall.