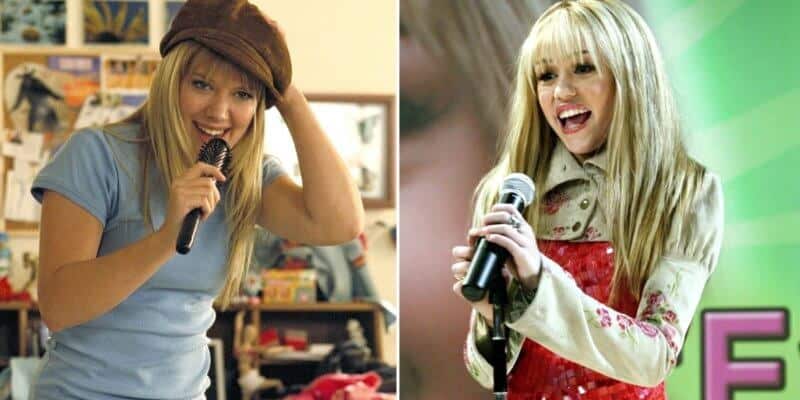 On Miley Cyrus’ new Instagram Live talk show “Bright Minded: Live With Miley,” Cyrus had Hilary Duff on the stream as a guest, where she revealed to the “Lizzie McGuire” star she only took her own Disney Channel role of “Hannah Montana” because of her.

“I would never be sitting here, being able to be a light if it wasn’t for you and you showing me how to do that,” the singer said to Duff during the social media show, which premiered Wednesday.

Cyrus told Duff that her career path is what inspired her own, saying that she first flew to Los Angeles so she could audition for Disney and “by chance” she ended up getting the role of “Hannah Montana.”

“..the only reason I wanted it was so I could do whatever you did,” said Cyrus. “And so really, I don’t think I gave a s— about being an actress or a singer. I just wanted to copy you no matter what.”

Cyrus continued expressing her gratitude to Duff’s career choices by thanking her personally during the stream, saying: “So I just wanted to say thank you again for just inspiring me…I would never be sitting here, being able to be a light if it wasn’t for you and you showing me how to do that,” said Cyprus.

In response, Duff expressed her appreciation of Cyrus’ kind words in addition to revealing the fact that Cyrus had also served as an inspiration to Duff.

“First of all, you’re so sweet, and I feel like I’ve known you for such a long time…Just to hear you say that, I feel like you have been such a bright light and you have made so many choices that have been so bold and you’re an inspiration to me and to all of us — and you continue to be,” said Duff.

Duff continued: “I can’t even believe what you’re saying to me. It’s so sweet and so kind…But really, I think that I totally look to you for inspiration on how to be cool and what to wear and what you’re doing and all of this s—.”

At the end of the love fest, Cyrus joked: “you can go from stalking someone behind their tour bus to FaceTiming them live on Instagram,” which caused both ex-Disney Channel Stars to burst into laughter.

Cyrus also revealed during the show that she had gone to Duff’s concerts during her tours.

She continued, “And from the nosebleed seats I was hoping you would notice me and be like, ‘Hey girl, nice Uggs!’ I don’t know what I was thinking, but I was obsessed with your T-shirt. It was bedazzled and it said ‘Nashville,’ and I immediately went and bought a bedazzler and I stayed up all night jeweling everything that I owned.”