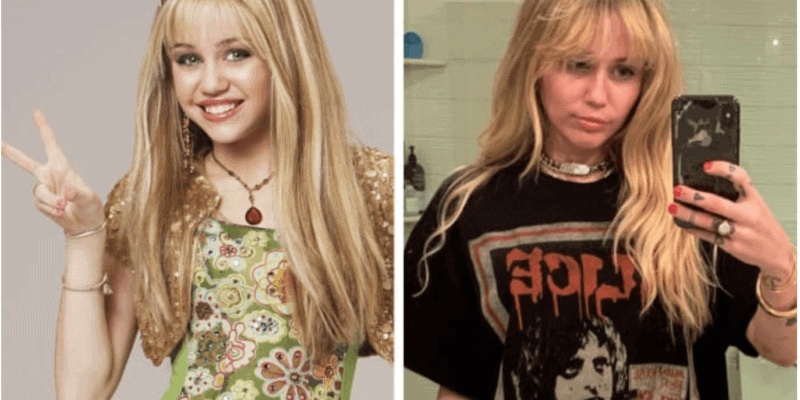 Over the weekend, Miley Cyrus cut her hair to look exactly like Hannah Montana’s wig from her claim-to-fame former TV sitcom, “Hannah Montana.” Now, fans are wondering if the pop star, who once had the best of both worlds, will be making a comeback.

If you were a fan of Disney Channel back in the day, you might know that this weekend marked 13 years since “Hannah Montana” aired its first episode ever on the cable channel. And to celebrate the occasion, Miley Cyrus took to her social media accounts to not only share some throwbacks to the show, which were turned into some pretty edgy memes, but also to premiere her new look, which features her own hair colored and styled to look almost identical to how Hannah Montana’s wig looked on the show.

In the tweet featured below, we got our first look at Hannah — I mean, Miley’s — new look. The bathroom selfie shows the star with long, bright blonde hair, styled with bangs, just like Hannah’s used to be!

In the caption for the image post, Miley writes, “Hannah is punk now.” If Miley were to have just shared this post as a standard selfie, not much would have been thought about it, but to make a reference to “Hannah” has people talking.

In addition to the image of Miley’s new look, the pop star also posted a video of herself singing along to one of the bubblegum pop princess’s most iconic songs, “The Best of Both Worlds.” In the video, Miley is jamming out to the song as she’s driving her car.

Comically, Cyrus also decided to revisit another song of Hannah, or at least, a song written entirely about Hannah Montana, entitled “Hannah Montana,” by the hip hop group Migos from 2013.

Another post that had fans talking was an image of “Hannah Montana,” whom Miley wrote a hashtag for in the post with her father, Billy Ray Cyrus.

In a report by Buzzfeed, it was found that some fans were questioning if Miley had actually colored and cut her hair to look like the TV star, which Miley addressed head-on in her Instagram story.

It was also found a few weeks ago that Miley had followed a mysterious Instagram account under Hannah Montana’s name, which is only following one active user on Instagram, Miley Cyrus. Currently, the account sits with just over 236K followers with no posts. Some are saying the account could be utilized once the comeback was to be officially announced.

This isn’t the first time we heard of a comeback from a Disney Channel star. Just recently, the Jonas Brothers found their way back to the mainstream, which still has fans going crazy. Hannah Montana could just possibly be the next one in line. At this time, this is all talk, as Disney nor Miley has confirmed a reboot of the popular television show. Fans will just have to cross their fingers and hope for the best, and continue to get a kick out of Cyrus’ wild social media posts.

What are your thoughts on the possibility of Hannah Montana making a comeback? Let us know in the comments below!