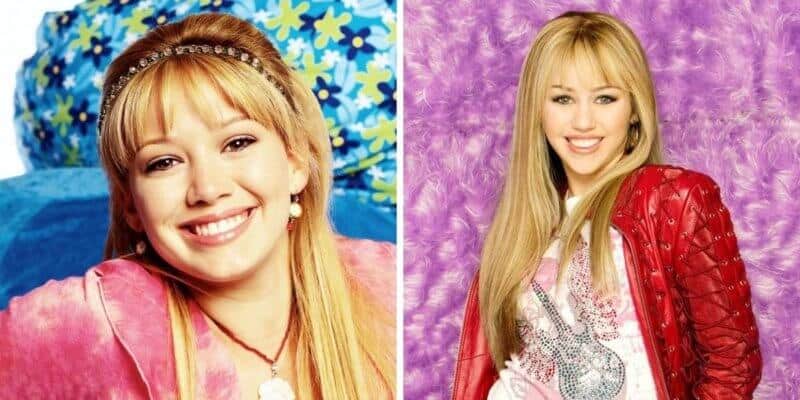 The Lizzie McGuire reboot has been on and off ever since it was first announced in 2019, however, one thing fans never thought about was a crossover!

However, have you ever imagined a crossover of Lizzie McGuire and Hannah Montana?

Well, in a recent with Cosmopolitan, Hilary Duff, star of Lizzie McGuire was asked if this was even a possibility. Cosmo asked Duff:

In the past, Miley Cyrus has given you credit for inspiring her to take on Hannah Montana. Do you think there could ever be a crossover between Hannah Montana and Lizzie McGuire?

In which Duff replied with:

Oh my god, I’ve never heard that one. But you might be starting something right now. I love Miley, I recently was on her show that she created during the quarantine, and she’s just awesome. She’s always showing me so much love and it kind of embarrasses me in a way. I’m like, come on, you’re like the epitome of cool and it’s really sweet that she’s just so vocal about being a fan growing up with me and I love her. And I don’t know, I’ve never thought about a Hannah Montana and Lizzie McGuire crossover, but never say never! Anything goes these days, right?

So even though Disney has not taken this into consideration, we as fans can still be hopeful! I mean, Duff herself said “never say never” and “anything goes these days”!

Earlier this year, we reported that Hilary Duff suggested the Lizzie McGuire reboot was not exactly “family-friendly” enough for the Disney streaming service. Similar to why the Love, Simon series — Love, Victor — was moved to Hulu, it looks as though that is the same reason why the original show creator was also taken off the project — For “family-friendly” reasonings.

Also earlier this year, we reported that Duff spoke out about the possibility of the Lizzie McGuire reboot moving to Hulu as well as her thoughts and reasoning behind the show saying “I feel a huge responsibility to honor the fans’ relationship with LIZZIE who, like me, grew up seeing themselves in her. I’d be doing a disservice to everyone by limiting the realities of a 30-year-old’s journey to live under the ceiling of a PG rating.”

In recent news, Hilary Duff spoke with POPSUGAR on not only her dedication to the Lizzie McGuire reboot but also where she and Disney stand on production. As we all know, Duff is extremely connected to her Lizzie character and she will continue to fight for Lizzie. “I feel like it’s our responsibility to honor the fanbase that grew up with her and where they are now,” she told POPSUGAR.

Duff made it known that Disney is still “really excited” about the Lizzie McGuire reboot (as is she) and the company is “dedicated to making it work”. However, due to the current global pandemic, everything will remain on pause for now.

Do you want to see the Lizzie McGuire and Hannah Montana crossover? Let us know your thoughts in the comments.