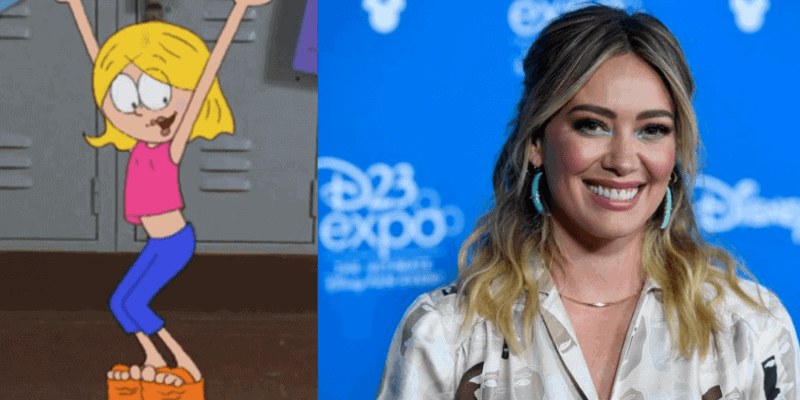 Where’s all my “Lizzie McGuire”/Hilary Duff fans? Get ready because more than 15 years later, we get to see Lizzie back in action thanks to Disney’s new streaming service, Disney+.

At the 2019 D23 expo, Hilary Duff surprised fans as she walked out on stage during the Disney+ panel, announcing the news that everyone’s been waiting for – A “Lizzie McGuire” reboot!

Although the original only lasted two seasons (running from 2001-2004), Duff’s character touched a lot of our hearts and soon became an idol for many adolescents when it came to navigating our young teen years. Lizzie was a typical 13 year old teenager trying to get through her middle school years along side her two best friends, Miranda (played by Lalaine) and Gordo (played by Adam Lamberg).

The hit series also led to a 2003 movie which focused on Lizzie graduating middle school and going on a class trip to Rome.

But what could the reboot series be based on? Here’s everything we know so far.

Hilary Duff recently appeared on ABC’s “Good Morning America” to discuss life as Lizzie McGuire. “Her life is framed pretty perfectly,” Duff said. “She has her dream job [as] an apprentice to an interior designer who is a pretty big deal. She has a gorgeous fiancé who is this chef at this cool Soho restaurant. She has a cute little apartment in Brooklyn and everything is going her way and she’s celebrating her 30th birthday with all of her friends.”

But who is this “gorgeous fiancé” that Duff refers too? Is it Gordo? Or could it be Ethan Craft? Or maybe it’s a guy we’ve never met before. I guess we will have to wait to find out.

The first episode won’t end the way we expect

Also during the GMA interview, Duff explained that Lizzie will get “some pretty big news at the end of the episode.” And although we aren’t sure what this “surprise twist” will be related to (her personal life, her career, her relationship) what we do know is that fans won’t see it coming.

We won’t find out how Lizzie ended up in NYC

The last time we saw Lizzie, she was exploring Italy and singing duets with pop star, Isabella, who had a very similar resemblance to her. We also see Lizzie and Gordo FINALLY kiss, and after her class trip was done, we assume Lizzie goes back home and resumes her normal, everyday life.

But fans shouldn’t expect the reboot to address what exactly happened after that and what led her to the Big Apple. Still, in a recent interview with Entertainment Weekly and People TV, Duff said that Lizzie “probably isn’t going to stay there for very long.”

This is the news we’ve all been waiting for! Animated Lizzie WILL return and she will be wearing those fashionably blue capri pants accompanied by that adorably cute pink crop top and those orange platform sandals.

“She’s the heart of it and the sass of it all,” Duff told Variety in a recent interview. The actress also confessed that her herself is “obsessed” with this iconic outfit, just like the rest of us.

Some familiar faces may pop up during the series

Fans all know and love Lizzie, but we also know it wouldn’t be a show without Miranda, Gordo, or even Kate or Ethan. And when asked about the return of Lizzie’s love interest Gordo on GMA, Duff said, “There’s a lot of surprises in store and I think everyone’s dreams are going to be fulfilled by going on the journey of the show.”

Hilary Duff is still ecstatic about sharing the news, and frankly, so are we, Hilary. So are we.

Yesterday was a blur..overwhelmed with all of the heartfelt congrats and the excitement #disneyplus #LizzieMcGuire pic.twitter.com/bMbYmlWIlo

SURPRISE!!! I’ve been trying to contain this excitement for a loooong time while this has been in the works! I am beyond excited to be home again, back with my girl ♥️…and into her 30’s #bringbackbutterflyclips #lizziemcguire #thisiswhatdreamsaremadeof #lizzieforpresident #DisneyPlus #D23Expo . . . . . . Also, If you needed yet another reason to get Disney+ ….the #lizziemcguiremovie will be living there!

Disney+ will launch in the U.S. on November 12.

Are you excited to see Hilary Duff reprise her role as Lizzie McGuire?

Comments Off on “Lizzie McGuire” is getting a reboot on Disney+: Everything we know so far